​Published in 2020
In light of the global Black Lives Matter movement in 2020, Jodi, as a community historian, has  always seen Robert G. Sanderson as akin to Martin Luther King, Jr., and W. David Mortensen as like to Malcolm X. She'll explain why. Sanderson and Mortensen, like King and Malcolm X in the Black community, were the most visible leaders of the Utah Deaf community. Their personalities and management styles, on the other hand, were polar opposites. Sanderson was a Deaf champion who was composed, polite, and assertive. Mortensen, on the other hand, was an ambitious and adamant Deaf leader. He was most well-known for his activism in politics. Sanderson, like King, was a bridge-builder who listened, was willing to help, and taught people on deaf matters. Mortensen, like Malcolm X, was a brave and daring leader who did not hesitate to speak out for the local Deaf community's civil and accessibility rights. 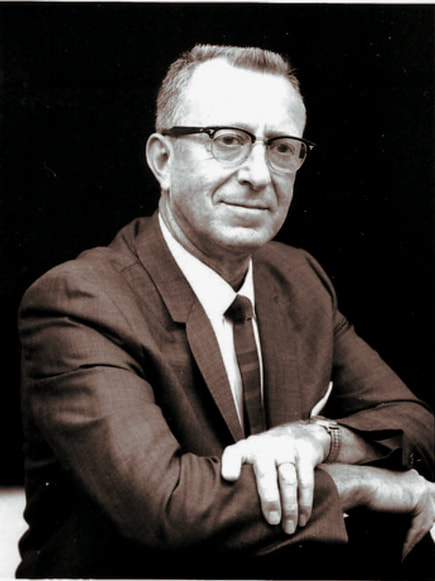 Robert G. Sanderson
Their different leadership styles worked effectively together to meet the needs of the local Deaf population. Sanderson and Mortensen, like Martin Luther King and Malcolm X in the Black community, are remembered for their tireless advocacy on behalf of Utah's Deaf community. All of them deserve my admiration. 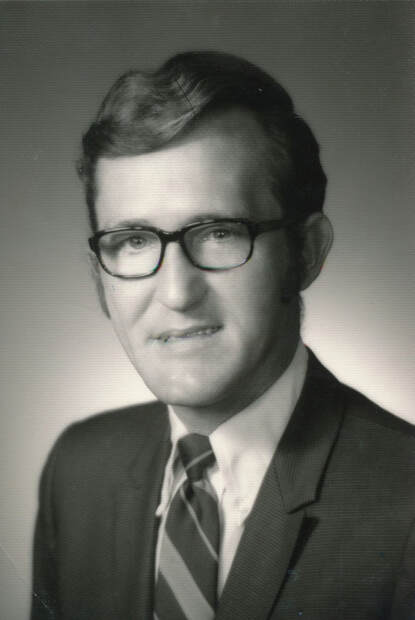 W. David Mortensen
Jodi does not want to single out our local prominent Deaf leader, Dr. Robert G. Sanderson, out of respect for the Black Deaf community, but she does want to note that while he was president of the National Association of the Deaf (NAD) from 1964 to 1968, he allowed Black Deaf people to join the organization and vote in 1965.

Although the National Association for the Deaf (NAD) was created in 1880 to advocate for Deaf people's rights, Black membership was prohibited until 1965, a year after the Civil Rights Act of 1964. Previously, Black Deaf people were also prohibited from joining other Deaf organizations and clubs. 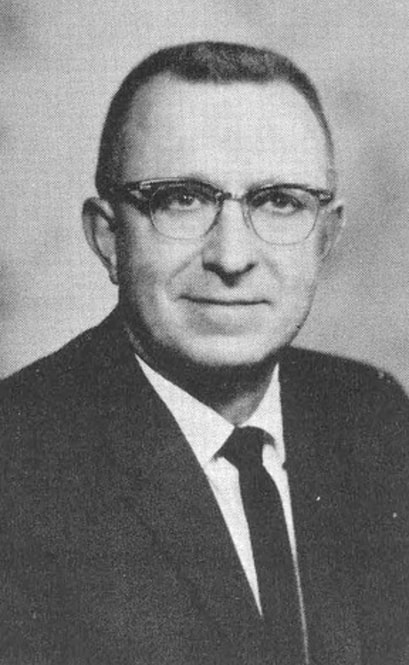 Dr. Robert G. Sanderson. UAD Bulletin, Winter 1965
At the 2012 NAD Conference, as a delegate representing the Utah Association of the Deaf, Jodi witnessed the heartwarming moment when the NAD recognized and formally apologized to the Black Deaf delegates representing the NBDA and NAD for its past denial of equal rights based on race.

In the wake of George Floyd's death and the following Black Lives Matter protests in 2020, the Black community has struggled and continues to suffer the effects of persistent racial injustice. Now is our opportunity to listen, learn, and grow.
Following the Black Lives Matter movement, Jodi learned a little more about Dr. Laurene Simms, a well-respected Black Deaf professor at Gallaudet University and social justice advocate. Dr. Simms, a nationally recognized authority in ASL/English bilingual education, assisted in providing bilingual training to the first set of teachers and aids just before the Jean Massieu School of the Deaf (JMS) was founded in 1999. Take a look at the snapshot of her giving a workshop presentation far below. 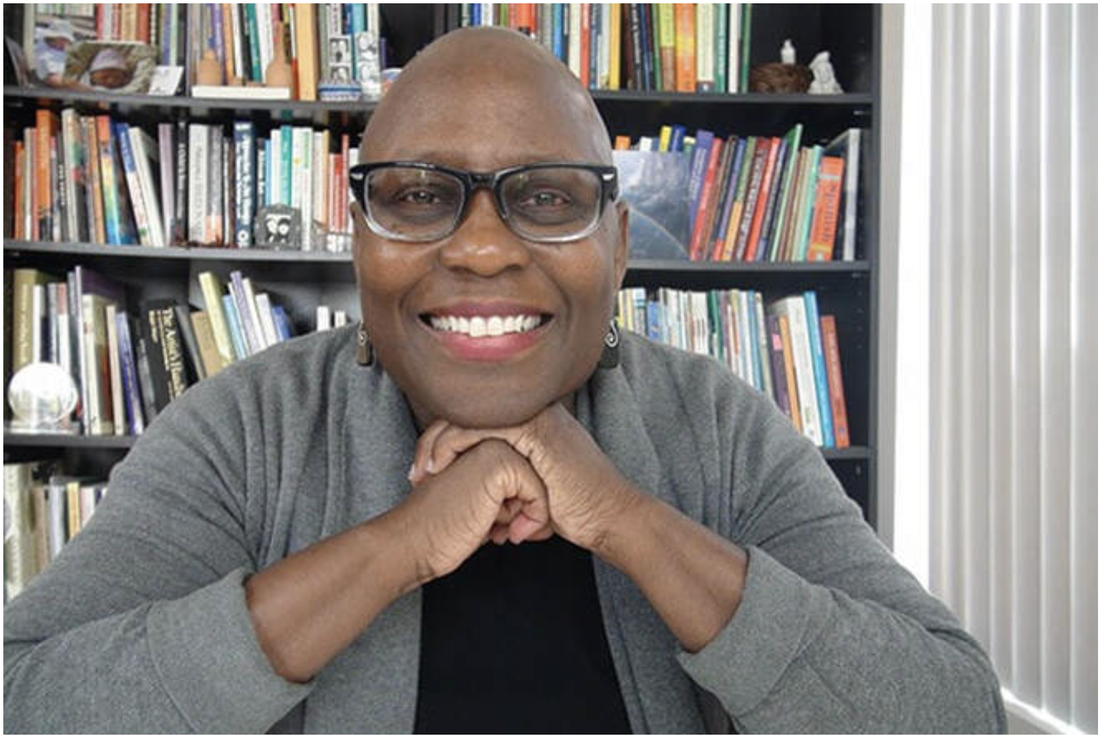 Dr. Laurene Simms, Gallaudet Professor @ Gallaudet.edu
In honor of one of its most well-known and distinguished alumni, the Indiana School for the Deaf named its elementary building after Dr. Simms in 2018. As a result, JMS's initial teachers and aides were lucky enough to attend Dr. Simms' training, which has now become part of the school's history! 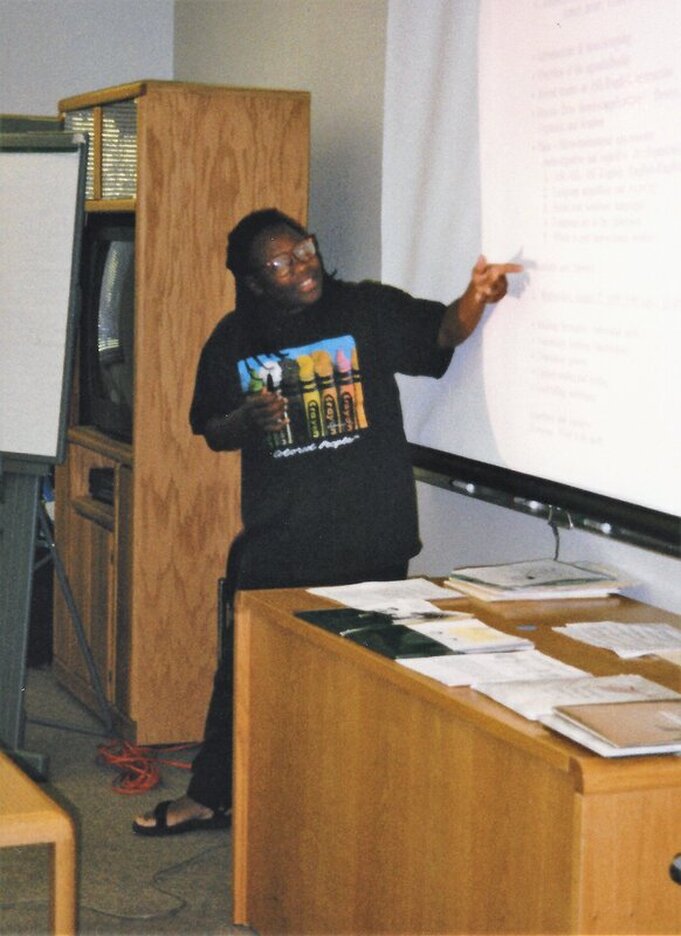 Dr. Laurene Simms giving a presentation to JMS' first teachers and aids. It was part of their inservice before doors opened in 1999
Jodi is passionate about the Black Lives Matter movement and was blown away by an article titled, "Black Deaf Culture Through the Lens of Black Deaf History," which she would like to share with you. It has a lot of information regarding Black Deaf history and culture, as well as biographies, arts, and entertainment. Jodi'd like to use this post as a platform to raise awareness about the Black Deaf community. Enjoy!