History of the
​Deaf Latter-day Saints

Building of the Latter-day Saints Chapel for Deaf Children 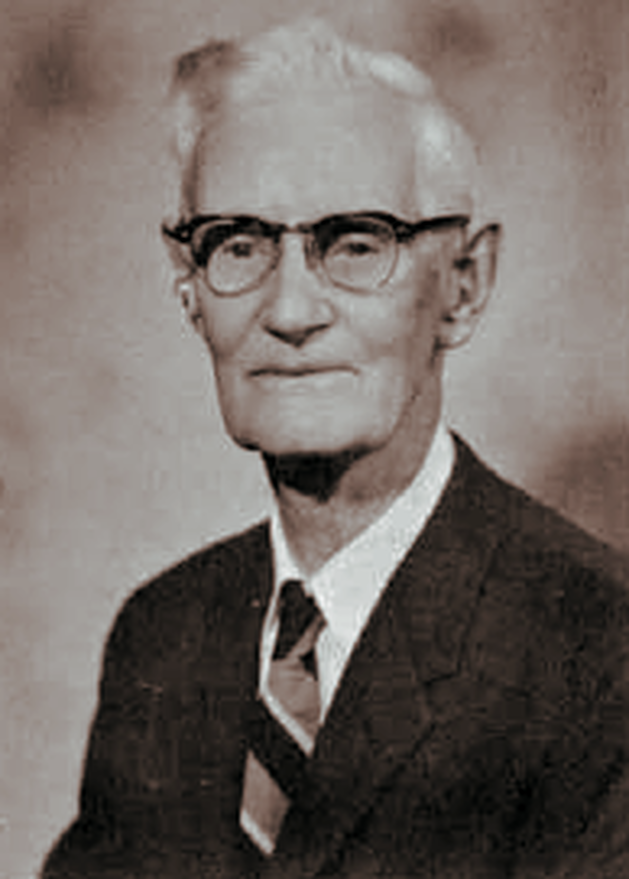 Max W. Woodbury. The UAD Bulletin, Winter 1967
In 1917, the Ogden Branch for the Deaf was founded in Ogden, Utah, with branch president Max W. Woodbury, who was hard of hearing himself. Woodbury and Elsie M. Christiansen (Deaf) were instrumental in establishing a Deaf Sunday School in the Ogden region.

Woodbury began teaching at the Utah School for the Deaf on September 1, 1902, after graduating from the University of Utah. Later in 1907, he was appointed as assistant superintendent of the Ogden 4th Ward Deaf Sunday School. In 1911, he was appointed superintendent, with Christiansen as his assistant. During his interactions with Deaf pupils and members, he picked up sign language.

In 1912, as the Ogden Deaf Sunday School group grew, Woodbury and Christiansen wrote to President Joseph F. Smith of the Church of Jesus Christ of Latter-day Saints, citing the need for Deaf members to gather in a most suitable environment. The environment in which they met for religious services was not suitable to their growth and learning. The letter also requested that a Deaf-only place of worship be built, allowing Deaf people to participate in church services in a way that best suits their communication and fellowshipping needs. Another letter was submitted to the church headquarters with the signatures of several Deaf adult members, expressing a strong desire for their own meetinghouse for worship services and social activities. In addition, Woodbury and Christiansen set up two meetings with the Church's First Presidency to explore the matter.

The First Presidency prayed about the issue with the Ogden Deaf group and approved the formation of a deaf branch, as well as the construction of a Deaf-friendly designed meetinghouse for Ogden's Deaf members. On January 14, 1917,  President Smith dedicated the Ogden Branch for the Deaf. It was a historic day that answered the Deaf members' prayers and brought hope. On February 4, 1917, the signing branch of the Ogden Stake was formally organized and established as an independent branch. 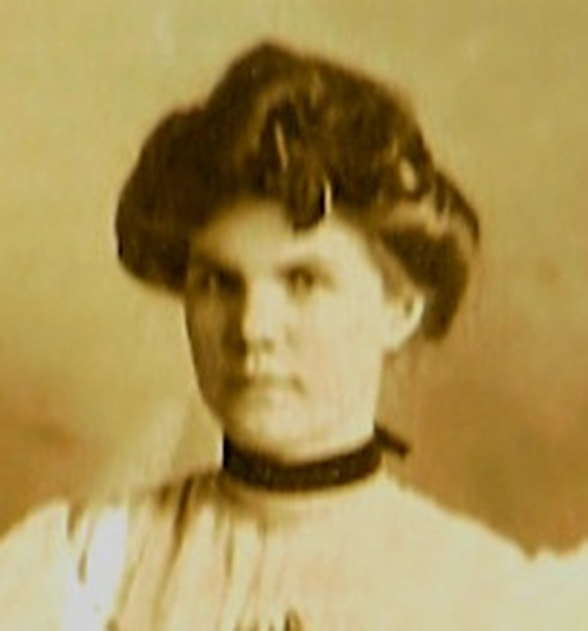 Elsie M. Christiansen
Max Woodbury presided over the Deaf Ogden Branch for fifty-one years. Many Deaf members grew up to become teachers and leaders in their home areas under his leadership. Eventually, the branch served as a model for other deaf units around the world, including the Salt Lake Valley Deaf Ward, Los Angeles Deaf Branch, Portland Heights Deaf Branch, Fremont Deaf Branch, Gooding Deaf Branch, and others (Walker, 2006).

Today, deaf branches and wards of the Church of Jesus Christ of Latter-day Saints have become a central place for worship and social activities where both Deaf and signing LDS and non-LDS gather to communicate in their sign language.

Read the Deseret News feature on the Ogden's Branch 100th anniversary in May 2017.

Elsie M. Christiansen served 28 years as an Ogden Branch for the Deaf clerk. She was the first and only Deaf woman who ever served as a clerk. ​​
Parallel Difficulties in Latter-day Saints Community
​and Utah School for the Deaf: 1962-1980﻿​ 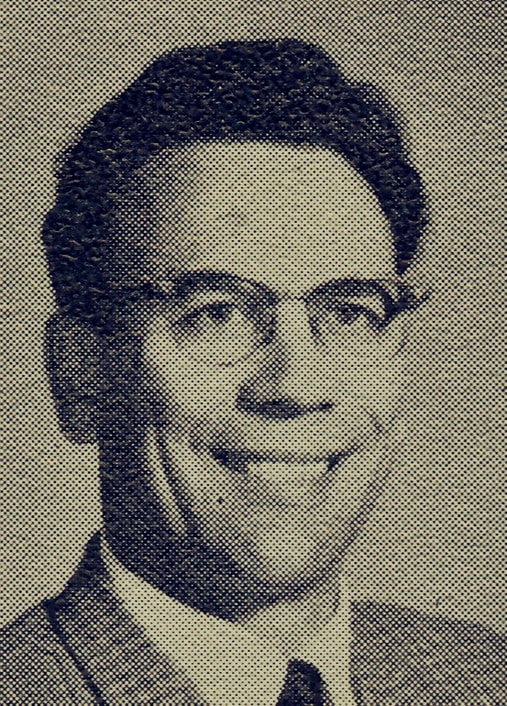 Dr. Grant B. Bitter. The Utah Eagle, 1961
Under the leadership of Branch President Max W. Woodbury, the Ogden Branch for the Deaf in Ogden, Utah, has been operating quietly using sign language since its establishment in 1917. Young Deaf members were offered opportunities to advance in their church callings as leaders. G. Leon Curtis (hard of hearing) and Kenneth L. Kinner (Deaf) taught the first seminary class at the Utah School for the Deaf (USD) in 1961 (UAD Bulletin, Fall 1961). This opened the door of opportunity to Deaf missionaries serving all over the world.

When the Utah School for the Deaf established the "Y" system in 1962, requiring Deaf students to begin in the oral program, members of the program continued to attend the Ogden Branch as well as seminary classes given in sign language. Branch President Curtis and his 1st Counselor, Kinner, were warned by President Woodbury, a former teacher and principal of the school, about the oral movement being adopted at USD and the chance that this program may effect the Ogden Branch as well (Ogden Branch for the Deaf: 90th Anniversary 1917 – 2007 Film; Kenneth L. Kinner, personal communication, June 19, 2011).

Following the release of G. Leon Curtis from his calling in 1969, Kenneth L. Kinner, the next branch president, and his first Counselor C. Roy Cochran faced unexpected challenges and tribulations when Dr. Grant B. Bitter, a staunch oral advocate, became the coordinator of the Seminary Program of the Deaf under the Church of Jesus Christ of Latter-day Saints in the State of Utah in 1970-71. The work of Dr. Bitter as a coordinator had a significant impact on both the USD and the seminary program. He had the impression that the Ogden Branch was cut off from the rest of the world. His goal was to introduce oral education at USD and in the church, resulting in greater integration of the Deaf people into the general hearing population.

Dr. Bitter and members of the school's oral department frowned on students from the oral program attending the Ogden Branch's services and activities. They attempted to take over the Ogden Branch and prohibit the use of sign language, particularly in seminary classes.

Dr. Bitter had a plan for the Ogden Branch by the time he became a seminary coordinator. He enlisted the help of seven USD oral seminary teachers to teach seven classes. Dr. Bitter named Boyd Neilson, a coordinator in the USD Oral Department, as the principal of the deaf seminary classes. There was just one sign language seminary class provided, and it was taught by Lola Elizabeth Jensen, a Deaf member and wife of a USD teacher, Don Jensen (Ogden Branch for the Deaf: 90th Anniversary 1917 – 2007 Film; Kenneth L. Kinner, personal communication, June 19, 2011).

Branch President Kinner and 1st Counselor Cochran met with opposition to regular processes and unity in the Ogden Branch, just as Branch President Woodbury had predicted. They were fighting the oral proponents' efforts to establish an oral influence in their Branch. USD's oral staff, led by Dr. Bitter, would not abandon the Ogden Branch. It sparked a battle between the two parties over communication methods, philosophy, and control of the Branch and Seminary classes (Ogden Branch for the Deaf: 90th Anniversary 1917 – 2007 Film; Kenneth L. Kinner, personal communication, June 19, 2011).

After years of conflict, the Church Educational Department stepped in and investigated the Ogden Branch in an attempt to resolve internal issues. As a result, the Ogden Seminary for the Deaf received its own building adjacent to the Utah School for the Deaf campus in 1976, fulfilling a dream. Richard Snow became the first Deaf principal and teacher of the seminary classes in Ogden and Salt Lake City for 34 years. Upon Brother Snow’s retirement in 2008, Nate Van De Graff, another Deaf individual, became the principal and seminary teacher for the Salt Lake area (Richard Snow, personal communication, February 9, 2012).

Note: This condensed version of the "Parallel Difficulties in the Latter-day Saints Community and Utah School for the Deaf: 1962-1980" narrative is not meant to be disparaging of the Church of Jesus Christ of Latter-day Saints or the Utah School for the Deaf. Its purpose is to bring attention to Deaf LDS members' tireless efforts to safeguard their language at the Ogden Branch for the Deaf. Furthermore, the goal of this website is to raise public knowledge about this history and the impact it has had on Deaf LDS members. 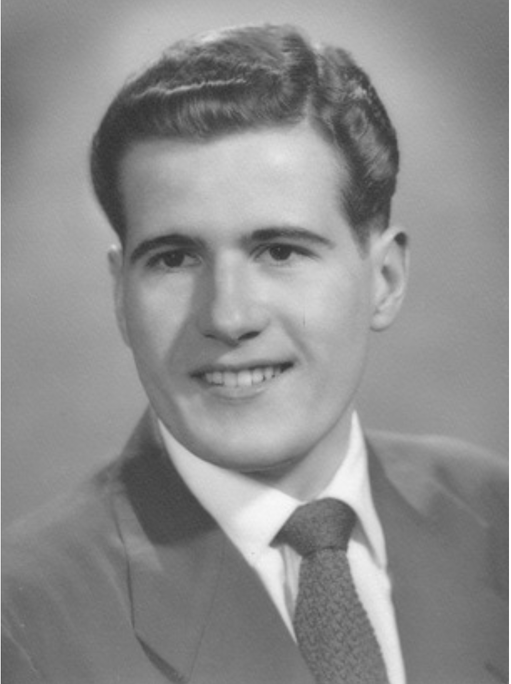 On November 20, 1968, the first two Deaf missionaries, Elder Abel Martinez (Utah) and Elder Wayne Kitchen (Utah), were called to serve in Los Angeles, California. Before heading to their mission, they had their mission training at the Language Training Mission (LTM) located at Lafayette Elementary School, which was in downtown Salt Lake City (This school used to be an oral program housed by the Utah School for the Deaf. Later, this school building was sold to the Church of Jesus Christ of Latter-day Saints. It is now demolished, and the spot became a parking lot). It located across the street from the Church Office Building (Doug Stringham, personal communication, April 8, 2020, & Lisa Richards Roush, personal communication, April 8, 2020; W. David Samuelsen, April 15, 2020).  There, they learned to teach the Gospel without the use of a sign language interpreter and the instructors did not know sign language. They managed to memorize the scriptures and mission discussions. Several Church leaders, such as Joseph Fielding Smith and Spencer W. Kimball, came to LTM to give a talk. Yet, the interpreter was not provided (Abel Martinez, personal communication, April 8, 2020). 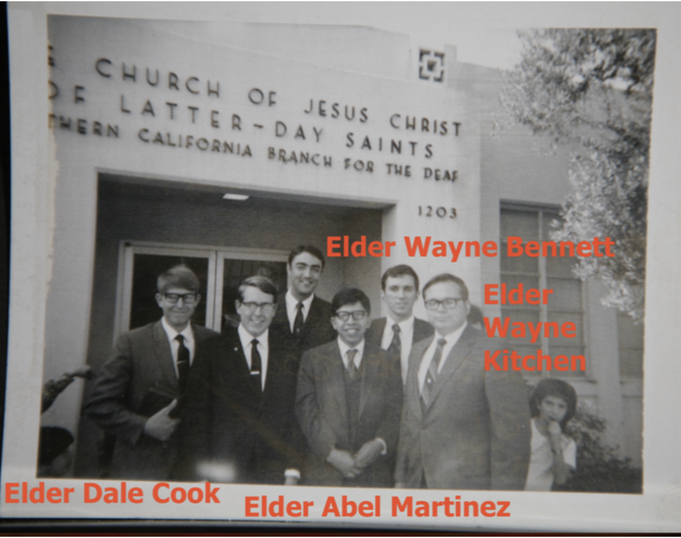 Elder Cook, Elder Martinez, Elder Bennett, & Elder Kitchen, December 1969
One year later, Elder Dale Cook (Utah) was called to the California Mission to serve with the other Deaf missionaries on December 3, 1969.  A few days later, Elder Wayne Bennett (Louisiana) transferred into the Deaf Program on December 9, 1969.  A group of Deaf missionaries pioneered as an official missionary for the deaf along with hearing missionaries, Elder Jack Rose, Elder Thayne Grossenbach, and Elder Clark Kemp.

As the Church and the number of missionaries continue to grow in the 1970s, the name of the Language Training Mission was located and reconfigured to become the Missionary Training Center in 1978. Finally, the American Sign Language Program was implemented and provided for a group of Deaf and hearing missionaries who are called to serve the deaf mission. 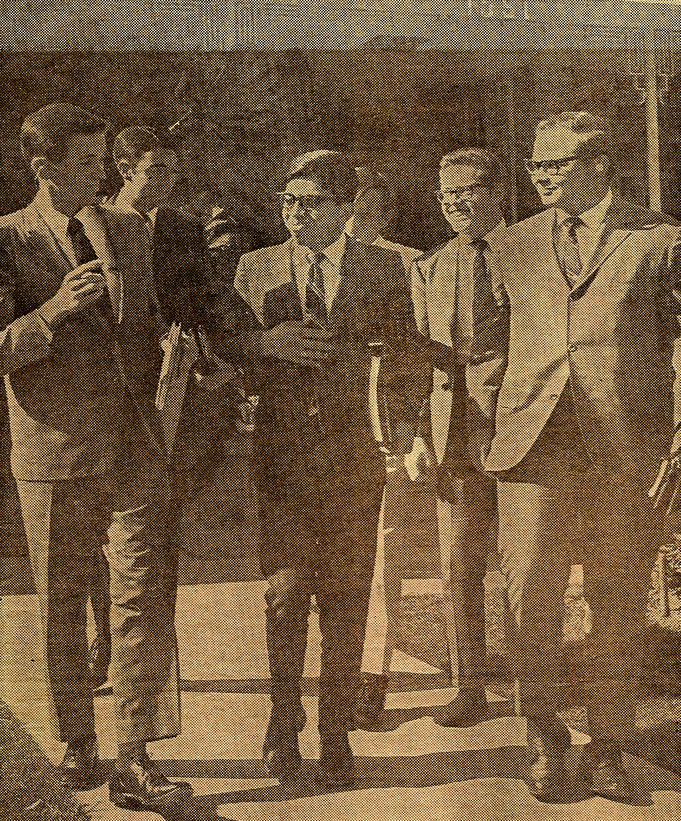 Lloyd H. Perkins, 1st Deaf SLV Bishop, 1971-1975
There is no documented record or acknowledgement of a Deaf man, Lloyd H. Perkins, a carpenter and branch president/bishop, for coming up with the idea of designing a deaf-friendly church building for Deaf members of the Church of Jesus Christ of Latter-day Saints (LDS). Lloyd Perkins, the bishop of the Salt Lake Valley Ward for the Deaf at the time, envisioned "deaf space" components to fulfill Deaf members' visual needs. It wasn't until 1977 that the idea of a deaf-friendly architecture emerged.

The Salt Lake Valley Ward for the Deaf was the first church dedicated completely to the needs of the deaf, and it was the first congregation in which the deaf themselves had a significant role (UAD Bulletin, December 1974).

The members were doubtless grateful to be able to attend the Salt Lake Valley Ward for the Deaf, where they could get their visual needs met. "Having their own ward meant deaf individuals were able to be recognized as having their own language," according to Bishop Perkins (Wikipedia, March 29, 2018). All things considered, none of this would have happened if it hadn't been for Bishop Perkins' visualization and the assistance of President Spencer W. Kimball. The existing residents of the 1st Ward are lucky to have these activists working to realize their dream of a deaf-friendly building that they can use and enjoy. 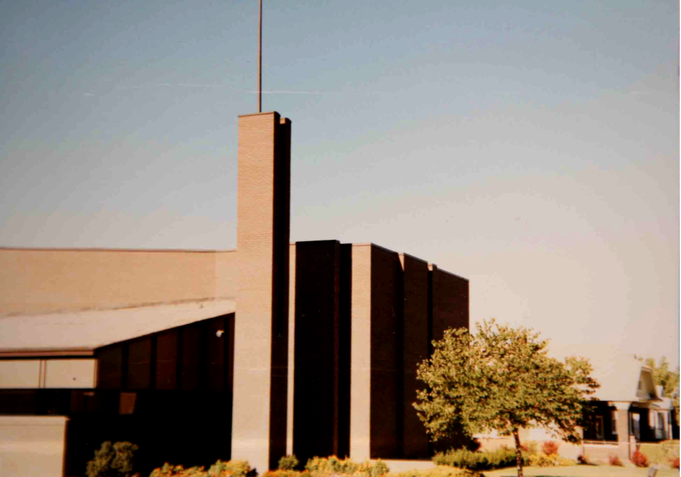 Anne Leahy and Doug Stringham's list of their presentations and current research can be found in the following websites:


Reid O. Simonsen’s list of news, materials announcements, and events announcements to Deaf members of the Church of Jesus Christ of Latter-day Saints can be found at www.deaflds.org
HISTORICAL DOCUMENTS
​
ARCHIVES
​​
VIDEO

A Slideshow of the
​Ogden Branch for the Deaf

A Slideshow of the
​Salt Lake Valley Branch and Ward
Notes