Kenneth Burdett
​School of the Deaf 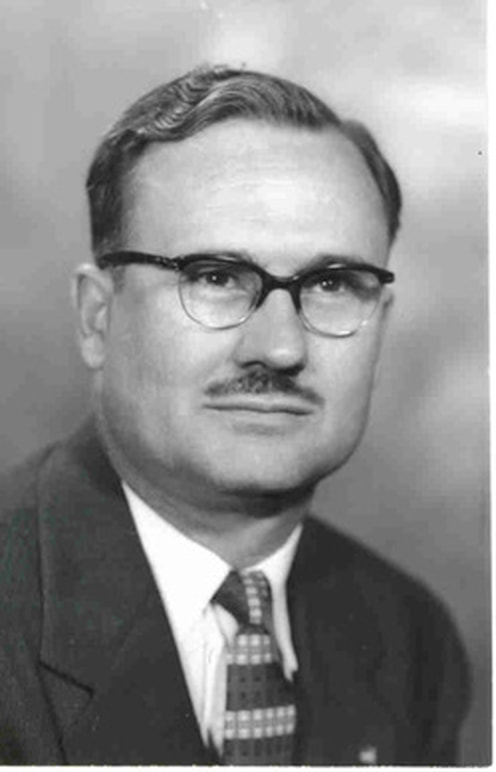 History of the Naming ​of the School

On August 23, 2011, the ASL/English Bilingual program at the Ogden Campus was officially named in honor of Kenneth C. Burdett, known as "KB" because of his long connection with the Utah School for the Deaf (USD).

USD Associate Superintendent Trena Roueche had previously determined that the USD North Division program should be given a special name. She and others in the program believed that using the name of a Deaf person would help students build a connection to Deaf culture and community.

Michelle Tanner, a teacher at the time at the Jean Massieu School of the Deaf, directed Trena to Jodi Becker Kinner, a community historian, for assistance in researching the names of notable Deaf Utahns. Excited with the prospect of naming the USD North Division after a deaf person, Jodi shared the news with her father-in-law, Kenneth L. Kinner, a former student of Kenneth's. He asked, "Why not Kenneth C. Burdett?" Thrilled with this suggestion, Jodi immediately recommended that Trena put his name on the ballot.
​
Continuing the naming process, Kenneth C. Burdett, Henry C. White, and Elizabeth Wood were picked from among the many suggestions to be presented to the USD community for a vote. These individuals were chosen with input from USD administration, parents, and students in the past and present. Each was picked for the impact they have made on Deaf students' education in Utah. KB received the most votes after all of the votes were counted. 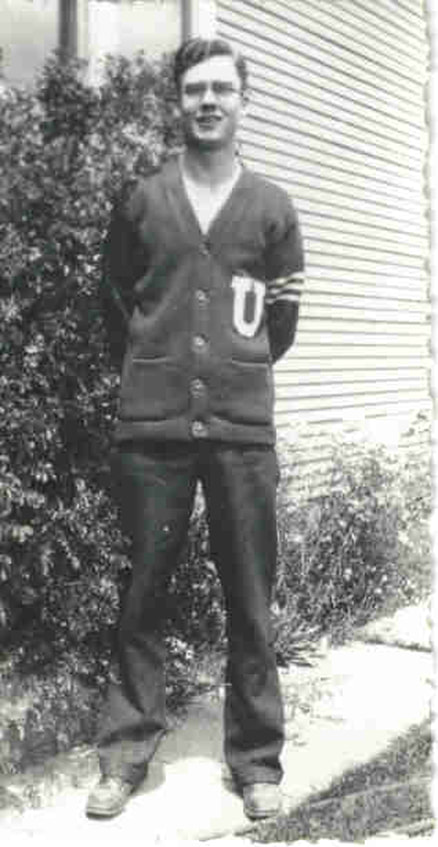 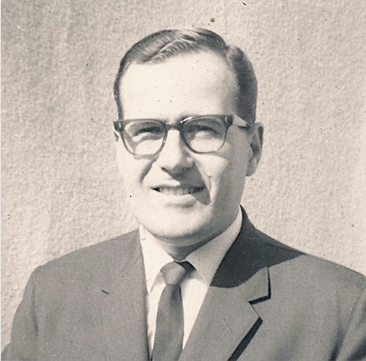 Kenneth worked at the school for four decades, from 1934 to 1974. He also spent fifty-two years at the USD as a student, boy's supervisor, head basketball coach, athletic director, teacher, printing instructor, and curriculum coordinator. ​​

Kenneth was honored with a Plaque Hanging Ceremony on September 29, 2011 at the Utah School for the Deaf. Ronald and JoAnn, Kenneth's two children, shared heartfelt memories of their father. Ronald's wife, Joyanne, shared same sentiment. The plague, as well as a portrait of Kenneth, are now on display at the Kenneth Burdett School of the Deaf's hallway. His name will be remembered for a long time (Kinner, UAD Bulletin, December 2011).
Kenneth's Devotion to the
​Utah School for the Deaf Throughout His Life 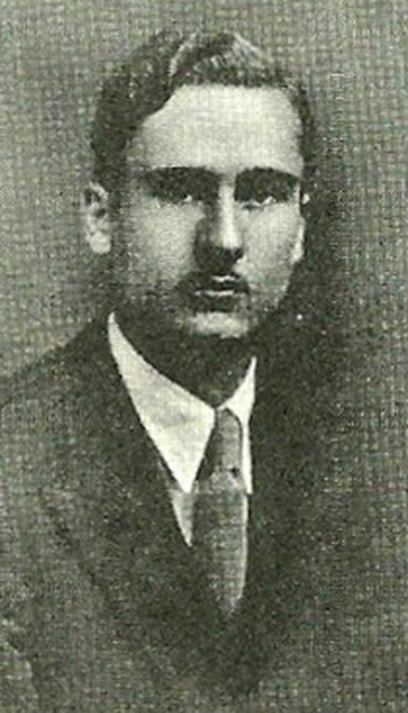 Dr. Jay J. Campbell, Deputy Superintendent of the Utah State Office of Education and an enthusiastic supporter of the deaf, delivered Kenneth's keynote address at the Utah Association for the Deaf's 25th Biennial Convention in 1973. (UAD Bulletin, June 1973; Ronald & Joyanne Burdett, personal communication, 2011). This was something Kenneth and his students were well aware of. Kenneth has always embraced and exhibited this philosophy throughout his career through his actions.
Kenneth contributed USD with unselfish devotion throughout his long and successful career. He not only worked at USD for four decades, from 1934 to 1974, but he also spent fifty-two years at the school in various capacities, including as a student, Boy's Supervisor, Head Basketball Coach, Athletic Director, Teacher, Printing Instructor, and Curriculum Coordinator. He was also a member of the Utah Association for the Deaf, the National Fraternal Society for the Deaf, and the Golden Spike Athletic Club for the Deaf, among other organizations (The Ogden Standard-Examiner, May 23, 1974).

Kenneth will be remembered as an inspiring leader who believed in each student's ability to grow, for his unwavering support for student athletics, and for his profound affection for his students (The Ogden Standard-Examiner, May 23, 1974). (Kenneth L. Kinner, personal communication, 2006).

Kenneth was also recognized as a brilliant teacher and coach who inspired his students and everyone he came into contact with (Dr. Robert Sanderson & Valerie Kinney, personal communication, July 8, 2011).
BIOGRAPHY
Here is a link to Kenneth C. Burdett's biography for further information. 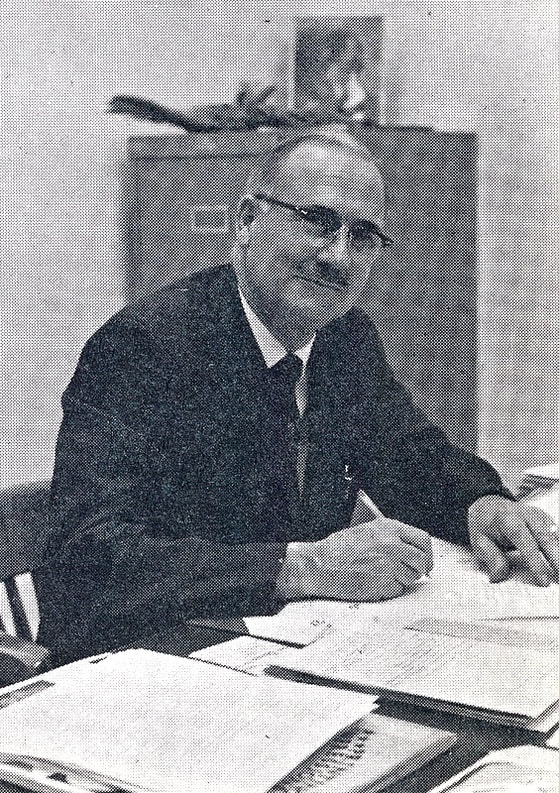 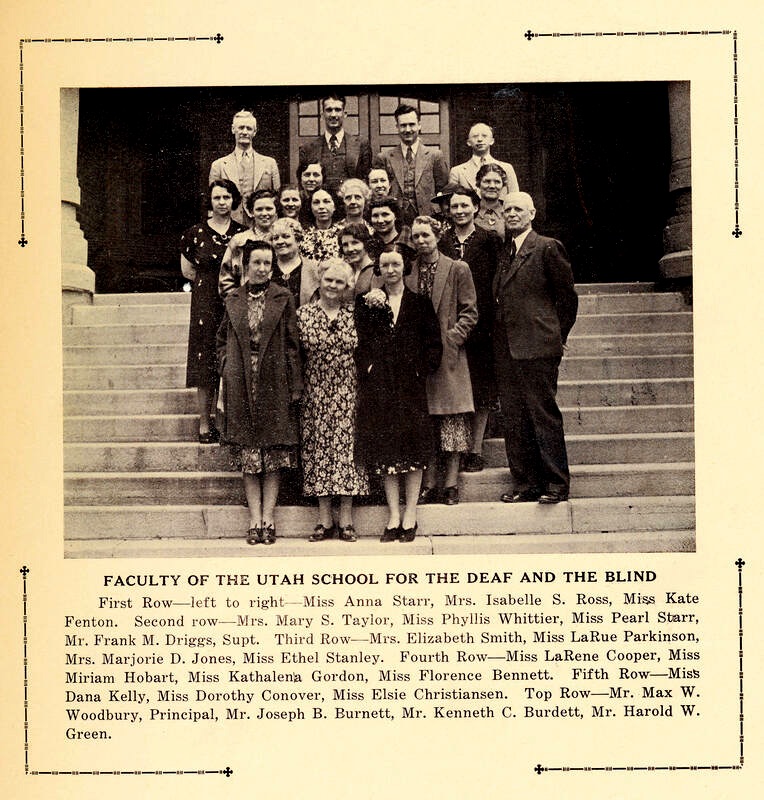 USD Teachers and Administrators. The Utah Eagle, May 1938 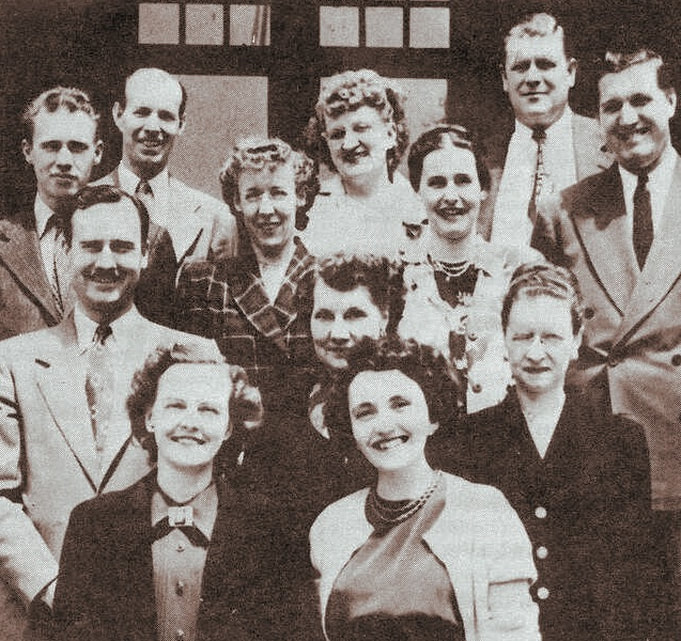 Teachers, principal, and superintendent of the Utah School for the Deaf assembled on the steps of the Main Building, 1947. UAD Bulletin, Summer 1969. Kenneth C. Burdett is on the right side of the second row 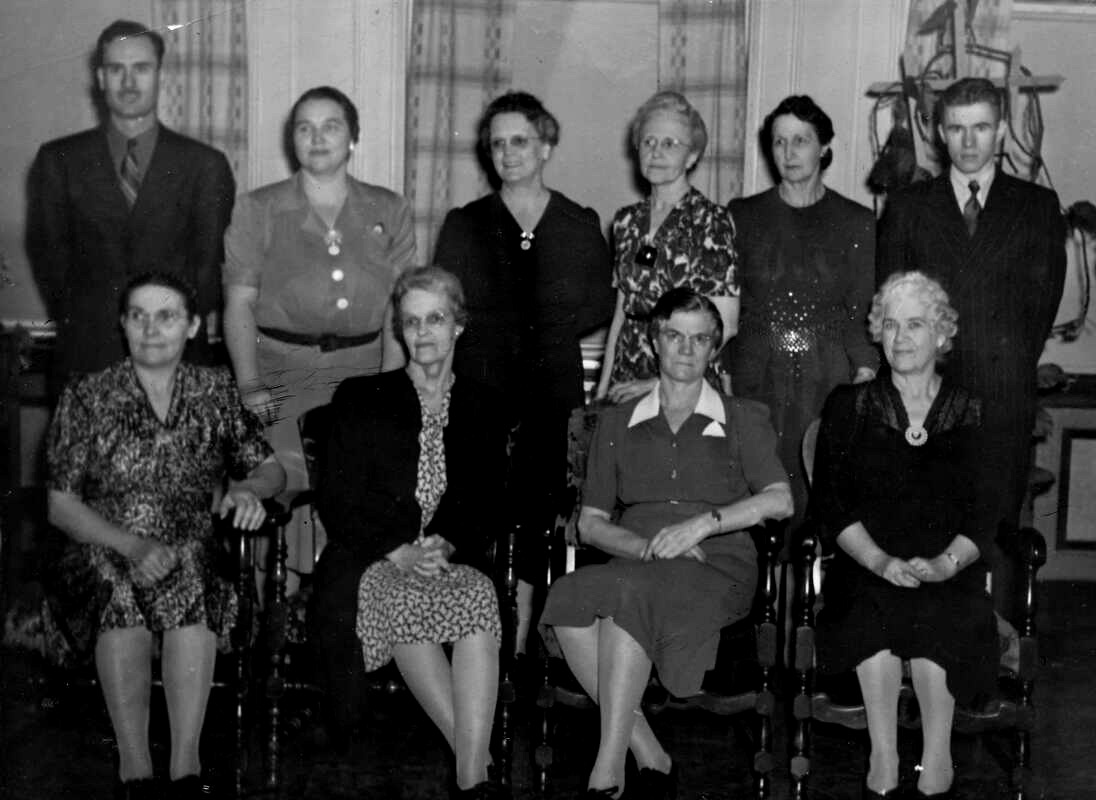 Kenneth C. Burdett standing on the back row on the left side, 1950s 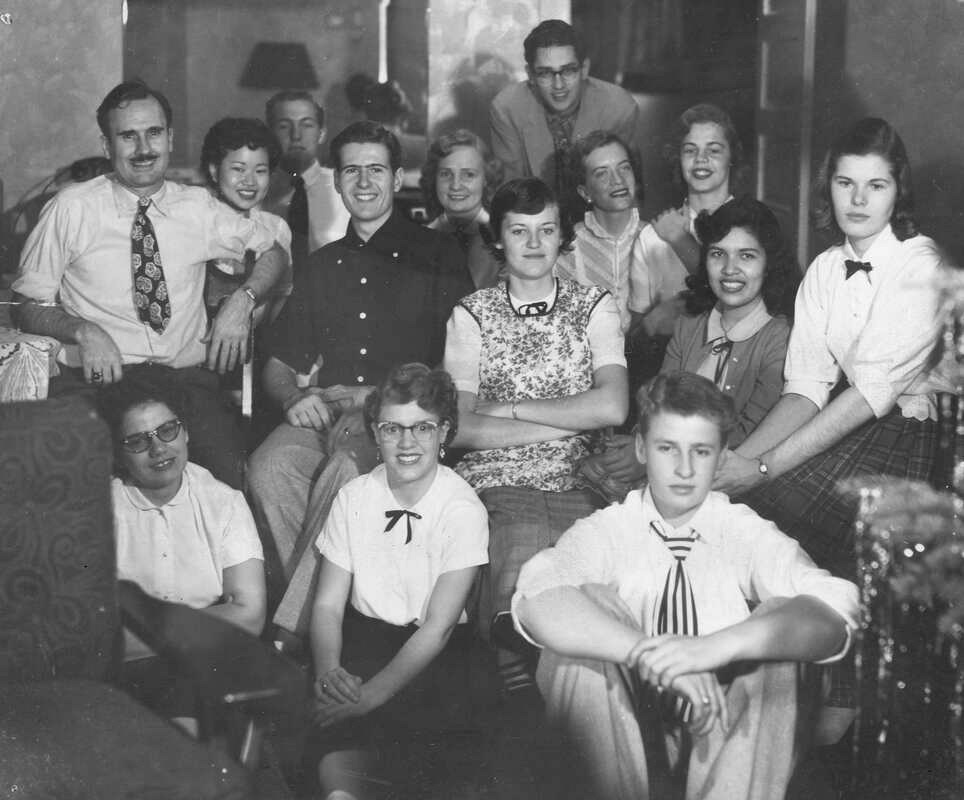 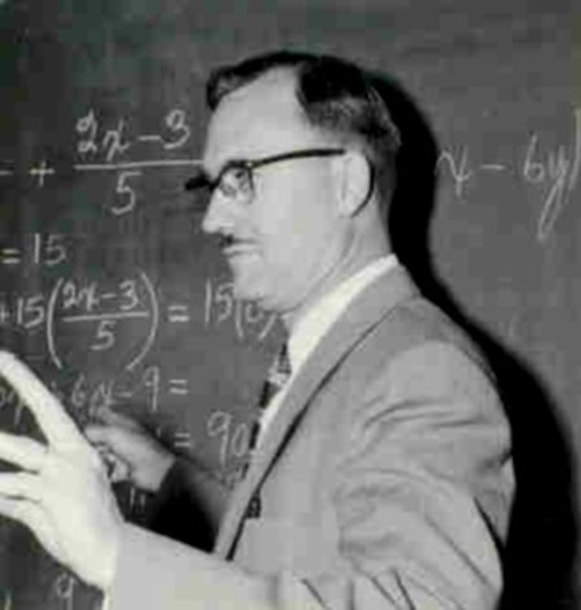 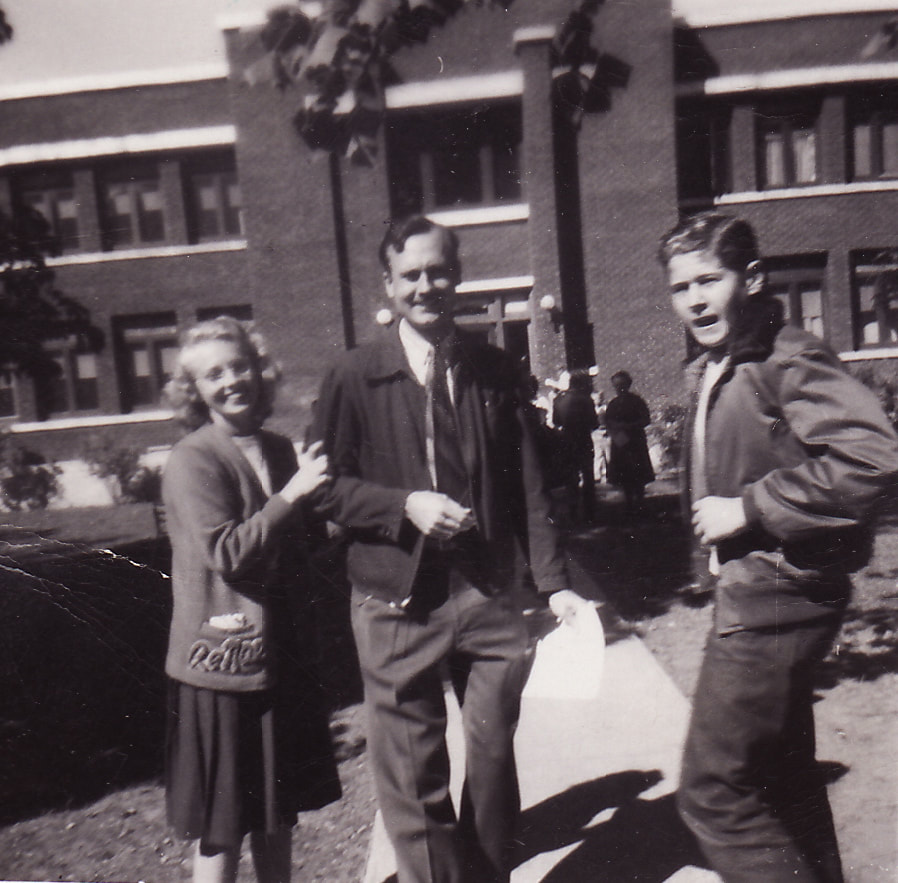 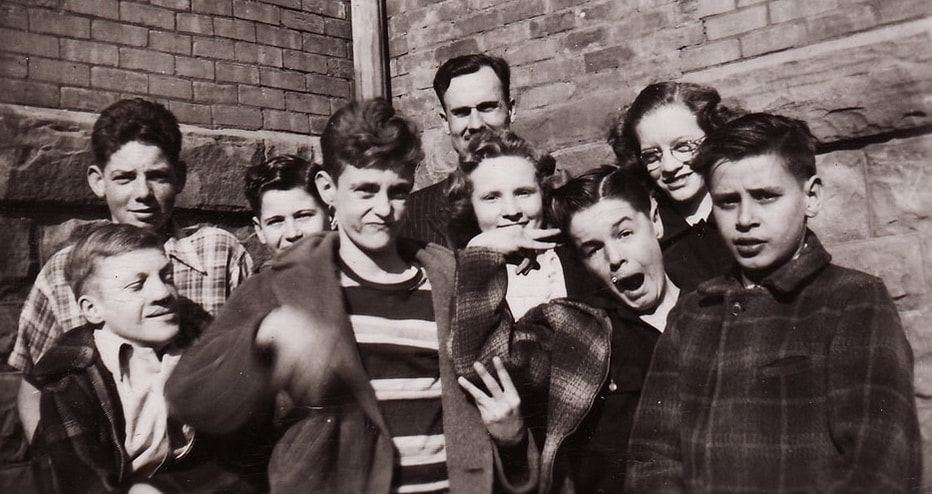 Kenneth Burdett with his students goofing around, 1940s 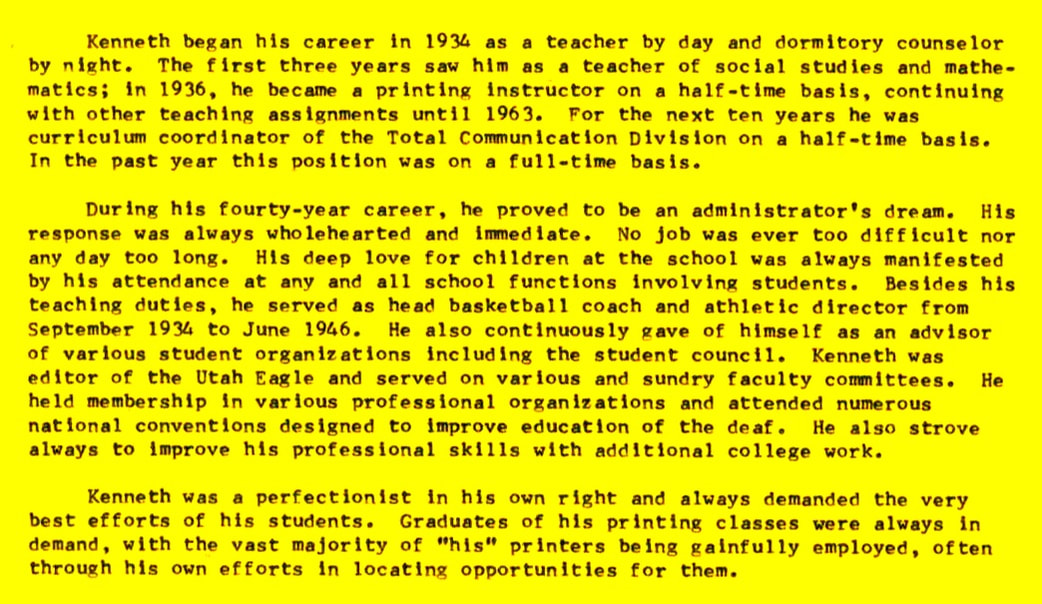 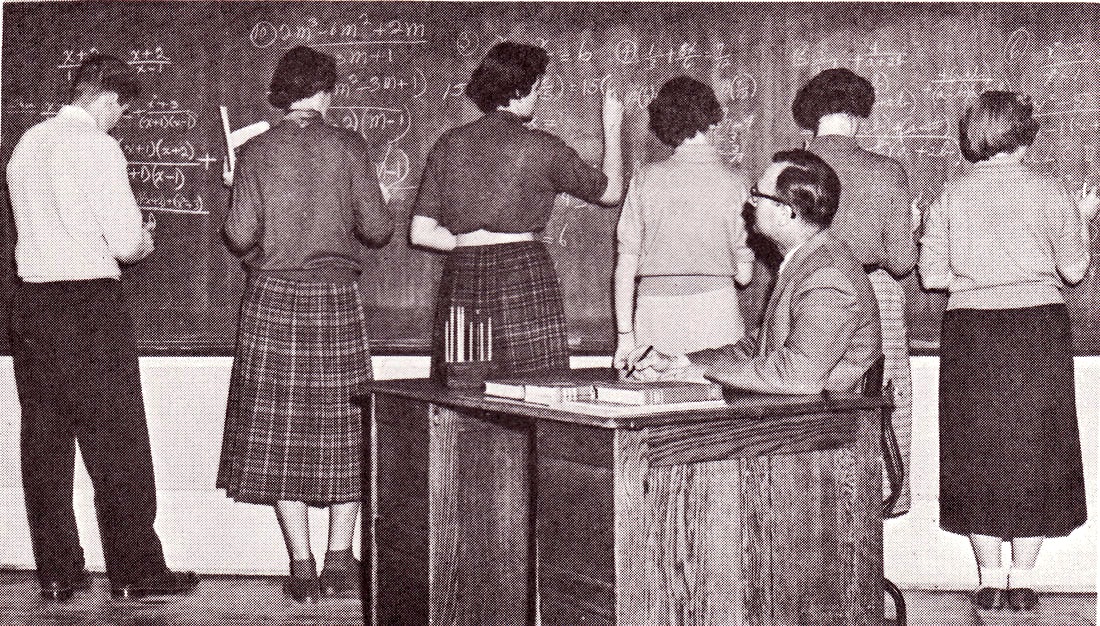 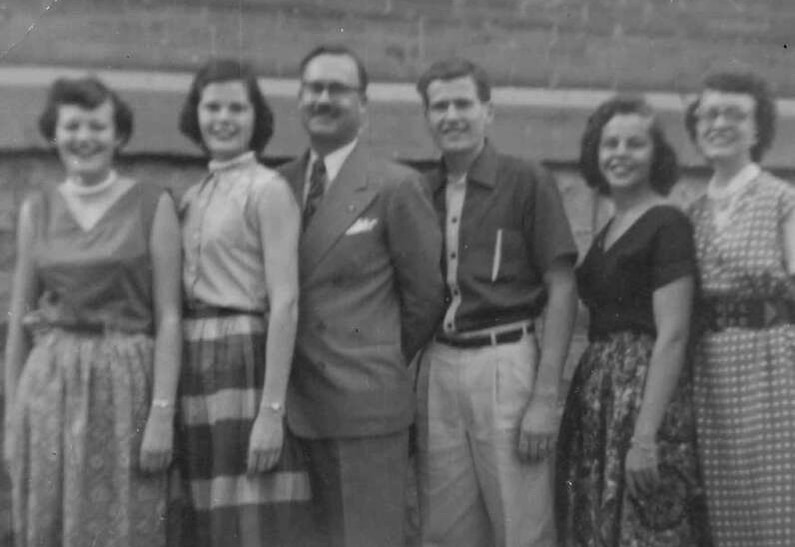 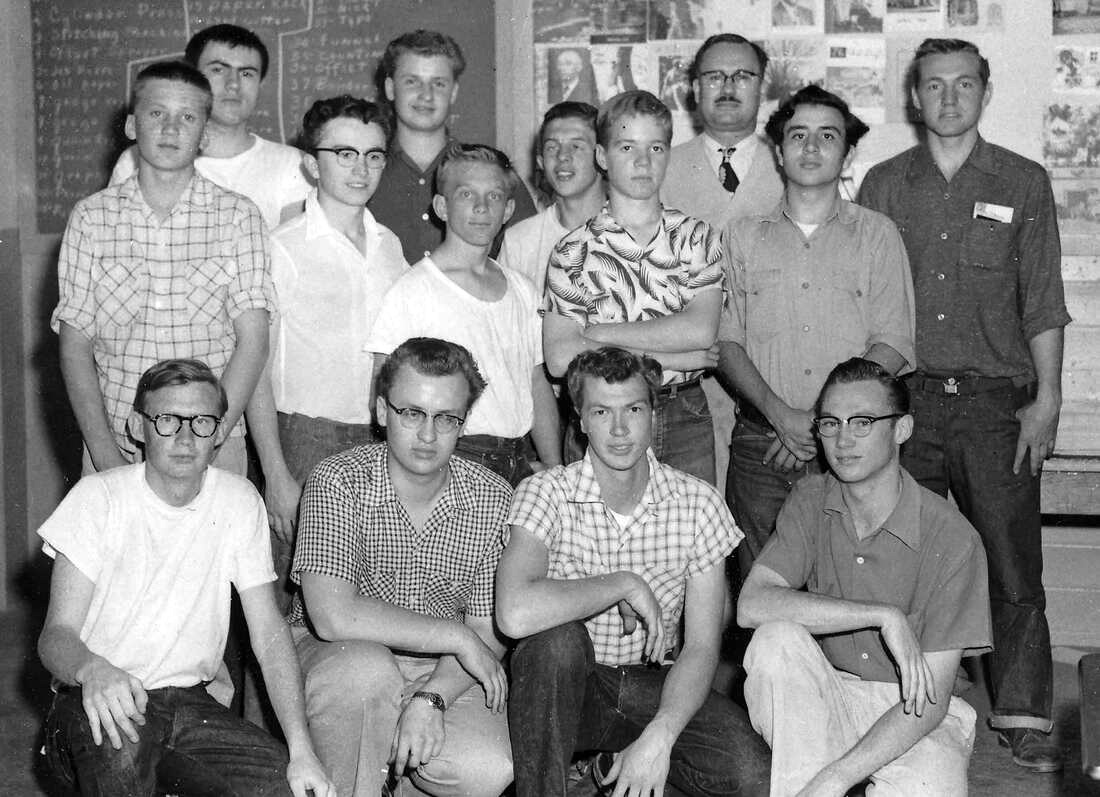 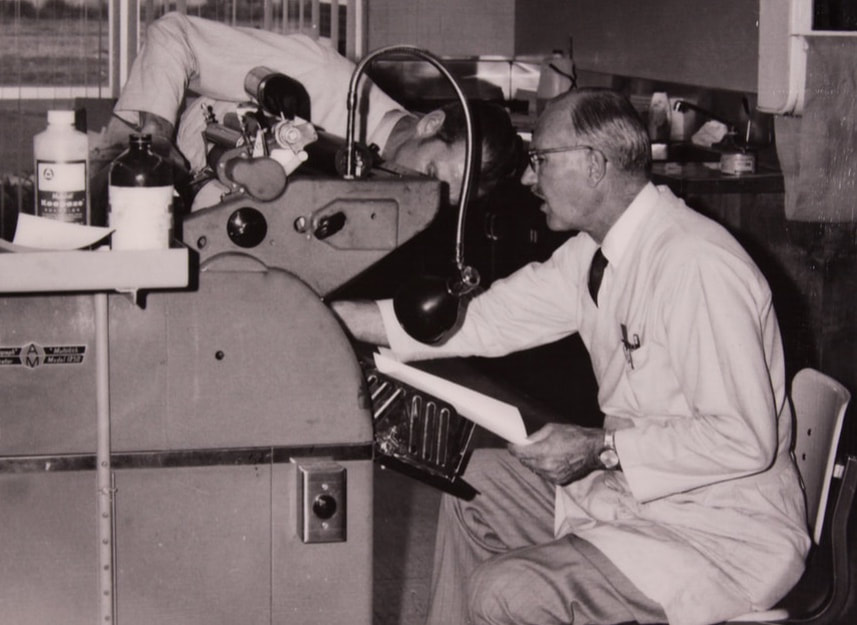 Kenneth setting up the printing machine 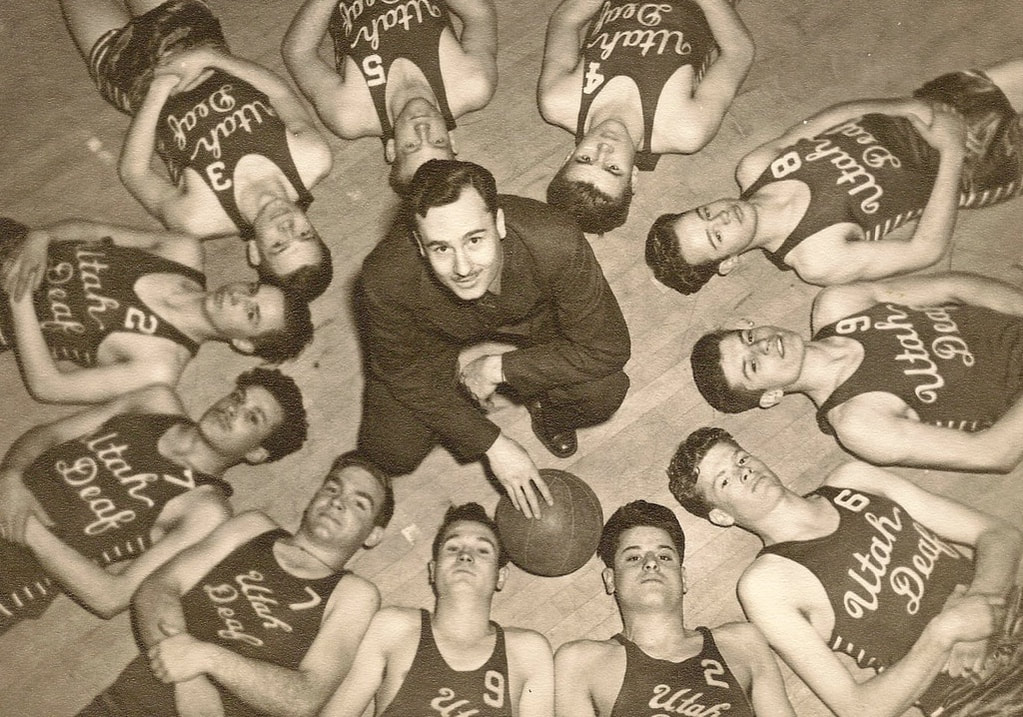 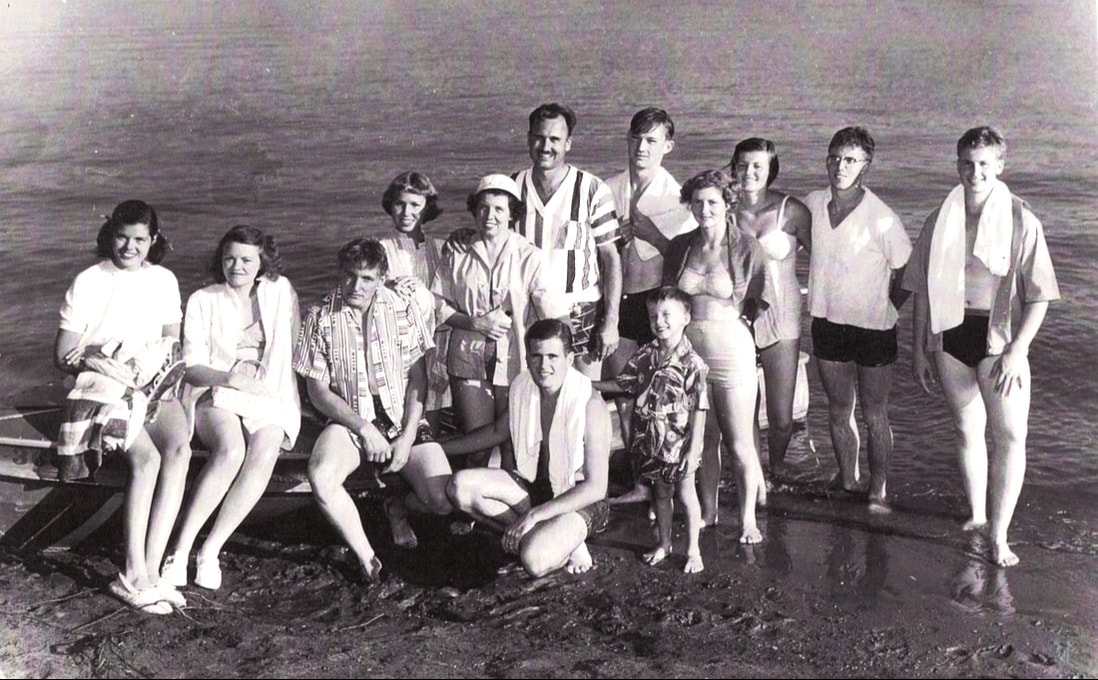 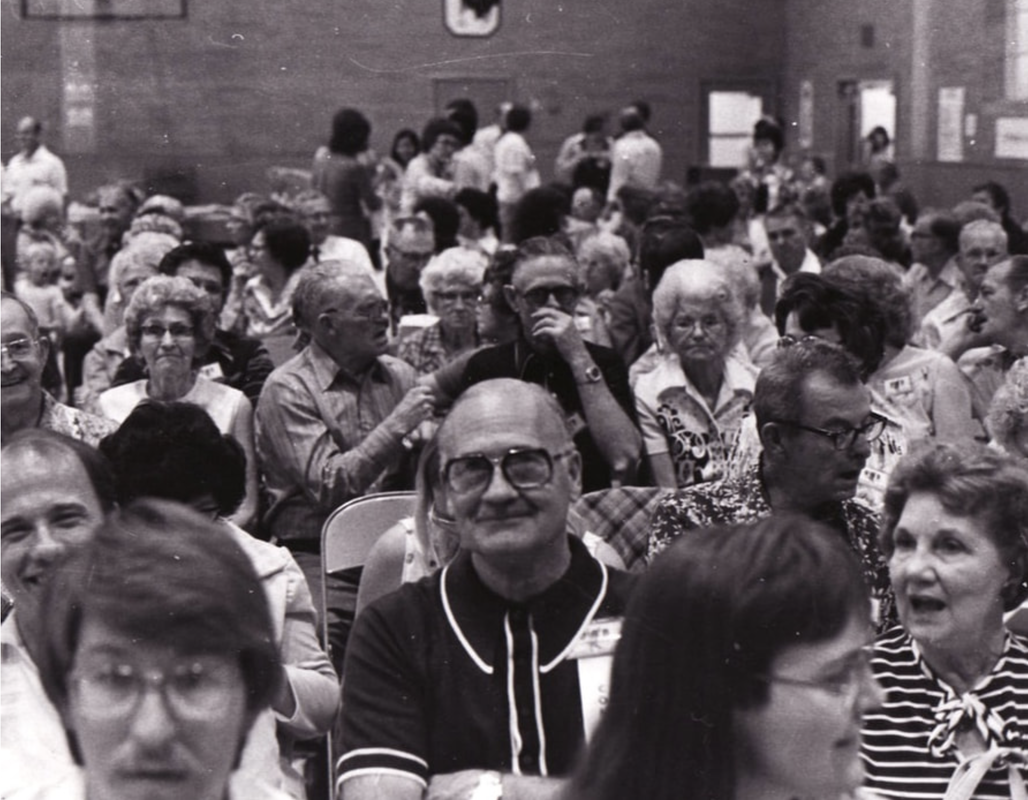 Kenneth C. Burdett at the 1976 Utah School for the Deaf reunion 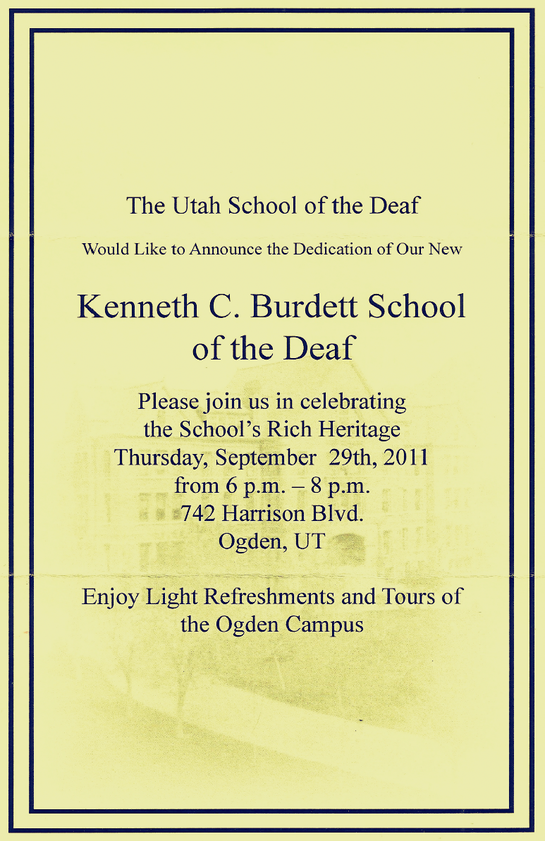 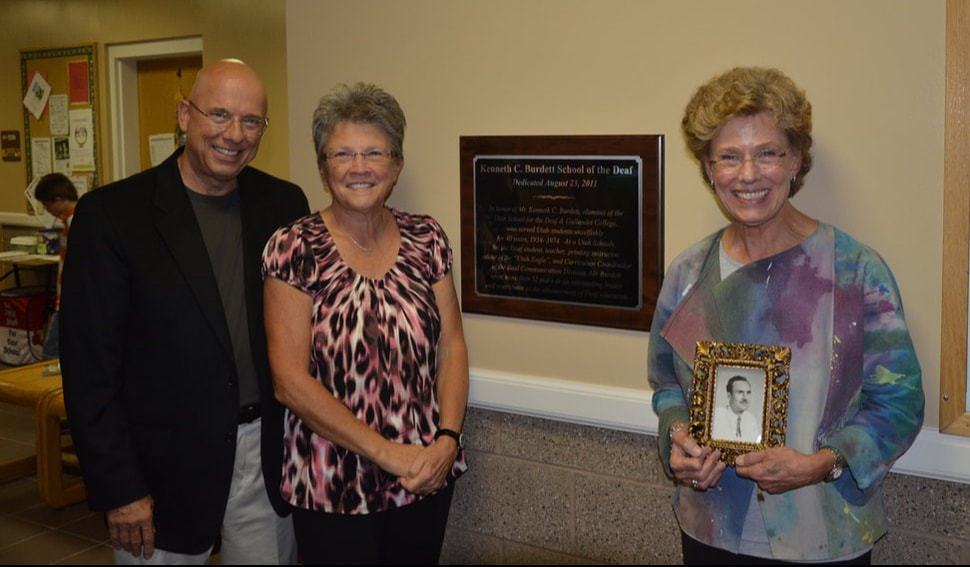 Ron, his wife, Joyanne and his sister, JoAnn at the dedication of the new Kenneth Burdett School of the Deaf 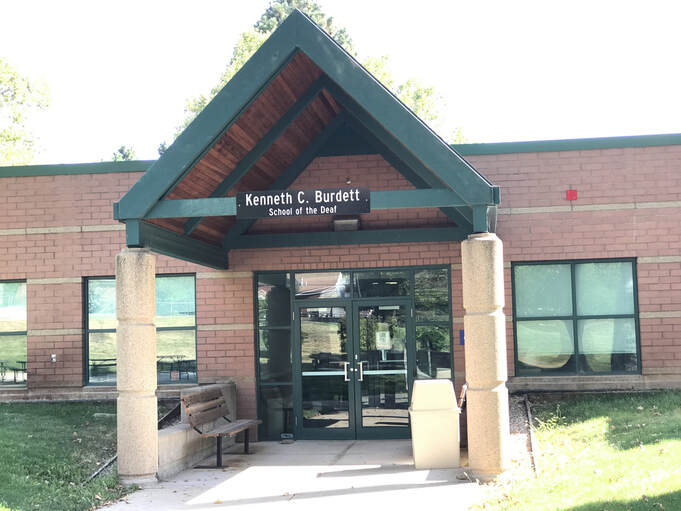