National Fraternal
​Society of the Deaf 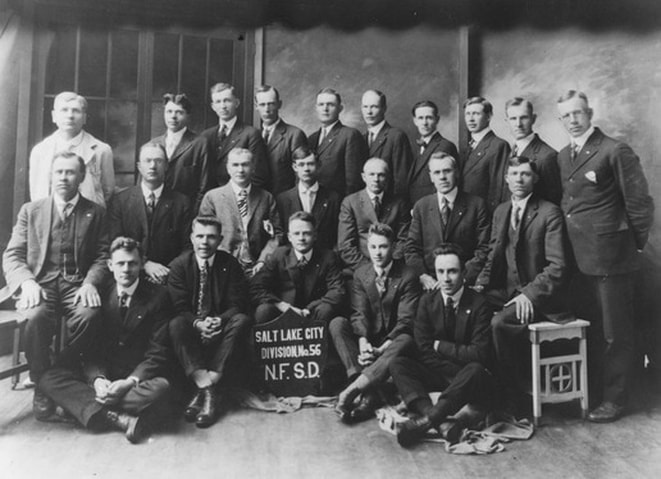 Justina Keeley
The original story on the Salt Lake City Division No. 56 begins in early 1916. Justina Keeley (Deaf) of Salt Lake City, Utah was visiting her home state of Missouri where she learned about a new insurance organization of the deaf, by the deaf, and for the deaf. She brought word back to Utah, and Melville John Matheis (Deaf) went to Chicago to investigate the set-up of this program. Matheis became a member of NFSD on August 1, 1916.  With the help of Grand Secretary-Treasurer Francis P. Gibson, Salt Lake City Division No. 56 was chartered on October 24, 1916 (UAD Bulletin, Summer 1966; Walker, 1966).  ​

Justina discovery was likely bittersweet, given that women would be denied full membership in the NFSD for another 35 years.  It was not until 1951 at the convention in Chicago, Illinois, that the NFSD agreed to give women regular insurance membership (Records of National Fraternal Society of the Deaf, 1900-2006).
The Ogden Division No. 69 was chartered on November 9, 1918. This division eventually closed. In June 1945, the Ogden division was re-chartered with 22 members from the Salt Lake City Division No. 56, and reorganized as the Ogden Division No. 127 (Walker, 1966). Over the years, the Frats sponsored many social activities such as dances, outings, banquets, parties and carnivals for both members and non-members (UAD Bulletin, Fall 1961). 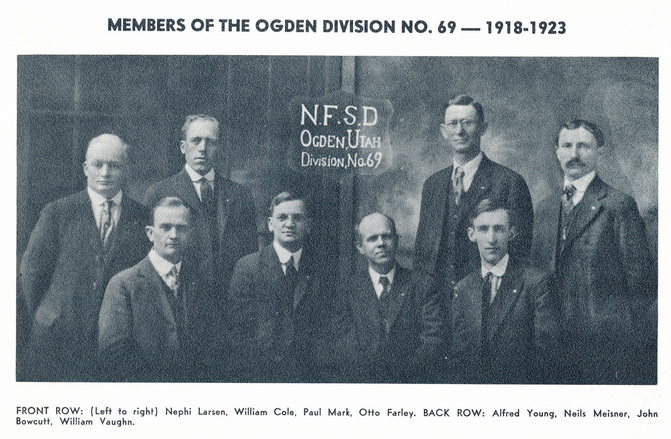 Melville John Matheis
Members of the division had the opportunity of learning from the book Robert’s Rules of Order how to conduct meetings and how to act as an officer, trustee, chairman, delegate, and such. Members developed leadership talents and abilities to carry out their duties. The Salt Lake City division, like many others, had brought happy hours of enjoyment to Deaf people in Utah through its activities, such as banquets, outings, swimming, softball games, plays, movies, to name a few (Walker, 1966).

Since the late 1980’s, many different kinds of insurance had begun to be made available to Deaf people. Life insurance companies, in competition with each other, began selling insurance policies at lower rates, and over time, offered them to deaf people (Walker, 2006). The reason Deaf people can purchase insurance today is because of the work begun in 1898 by a group of thirteen young men who formed the NFSD.

As of January 1, 2007, the NFSD’s Board of Directors decided to cease operations and turn over its insurance business to the Catholic Order of Foresters. After 105 years, the NFSD had gone out of business (DeafWeekly, February 21, 2007).  Upon its closure, Jerry Taylor was the last president of the Ogden Division No. 127, while Willis Morton was also the last president of the Salt Lake City Division No. 56.

The National Fraternal Society of the Deaf was one of the oldest deaf organizations in the nation. For more than 100 years, the NFSD was the world's only insurance organization managed by Deaf and hard of hearing people for the exclusive benefit of deaf and hard of hearing people and their families. Thousands of Deaf people benefited from the insurance provided by the fraternal society.

Since its founding in 1901, NFSD had built a financially successful business, ensuring that Deaf people no longer encountered the kind of difficulty in purchasing insurance coverage that the founders themselves had experienced. The NFSD contributed to the elimination of such discrimination and invited stiff competition from other insurance providers.  The organization set a fine example of the successful achievement of a determined group of Deaf people. Additionally, the NFSD had proven that deafness need not be a barrier to one’s success in the business world (Gannon, 1981).
HISTORICAL DOCUMENT

Kinner, Jodi B. (2012). Divisions of the National Fraternal Society of the Deaf Organized in Utah.(PDF)
ARCHIVES