Published in 2017
Updated in 2021
The Robert G. Sanderson Community Center of the Deaf and Hard of Hearing  celebrated its 25th anniversary on September 8, 2017. The event drew about 450 Utah Deaf residents who enjoyed games, food, and a performance.​

The event's theme was "Blast from the Past," and it featured a look back at the community center's rich history, which dates back to 1946, when a need for a meeting place for Deaf and hard of hearing people in Utah was identified. Early pioneers, such as Dr. Robert G. Sanderson, the first Deaf coordinator in Utah, worked tirelessly in the 1960s to develop a gathering space. The first community center debuted in Bountiful in 1983, and the present Sanderson Community Center opened in Taylorsville in 1992. 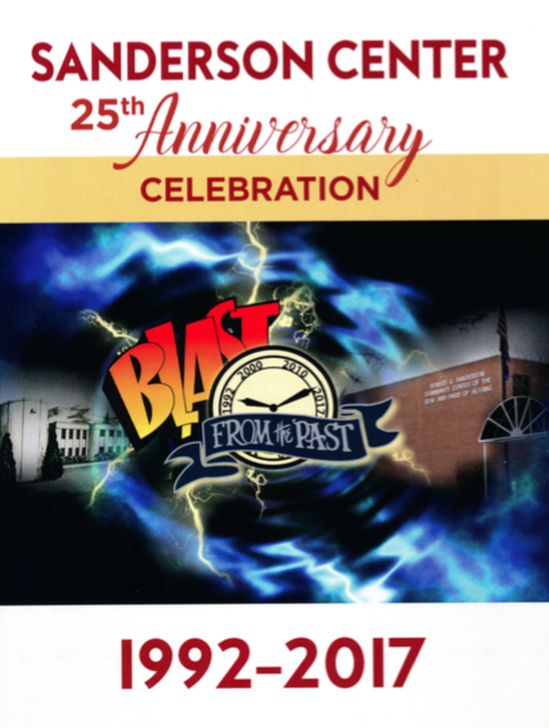 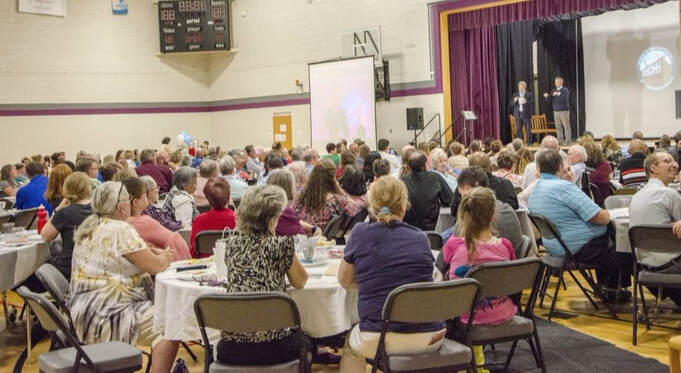 Approximately 450 Utahns joined the event celebrating with games, dinner, and performance
The historical timeline panels from the Sanderson Community Center were on display in the lobby area, allowing visitors to learn about the center's history. Joene Nicolaisen, Diego Acosta, Robin Traveller, and Jodi Becker Kinner cooperated to make historical panels a reality. 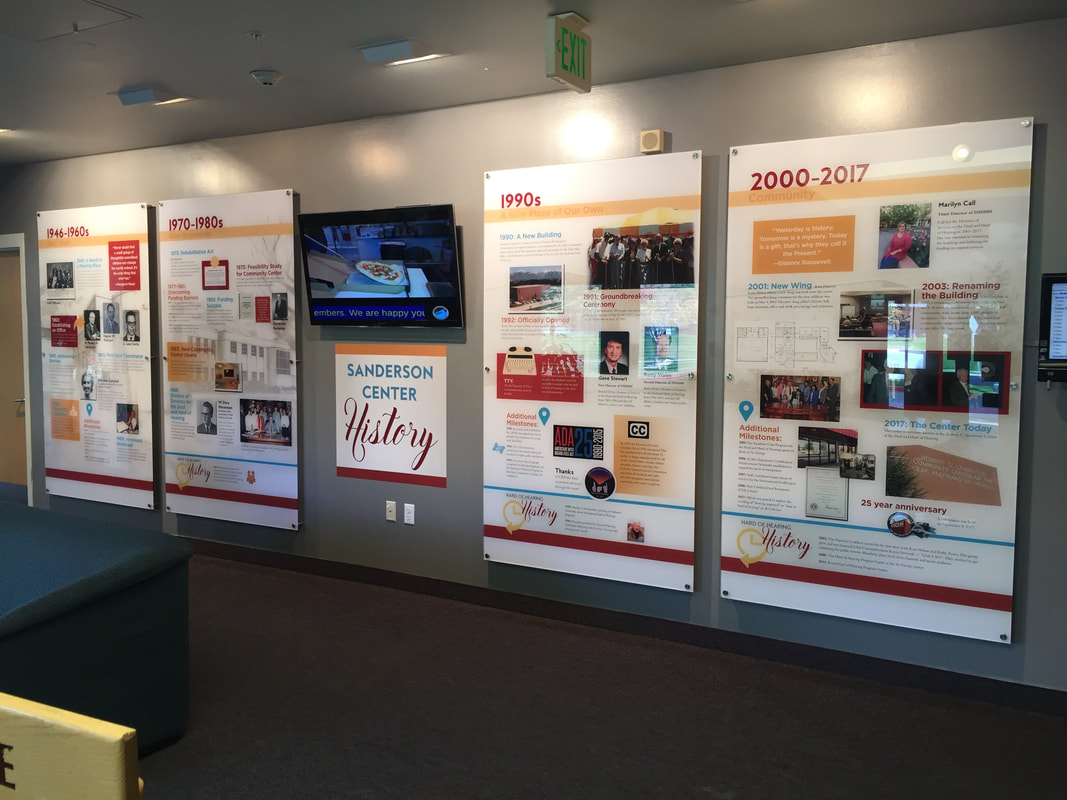 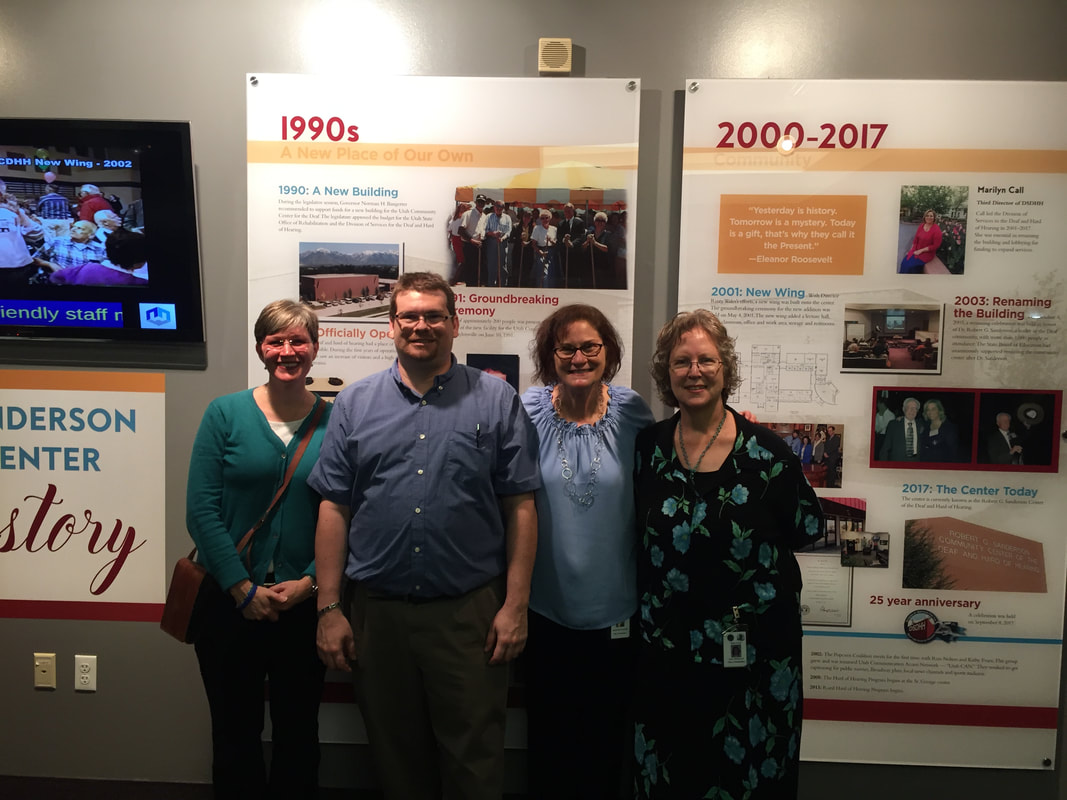 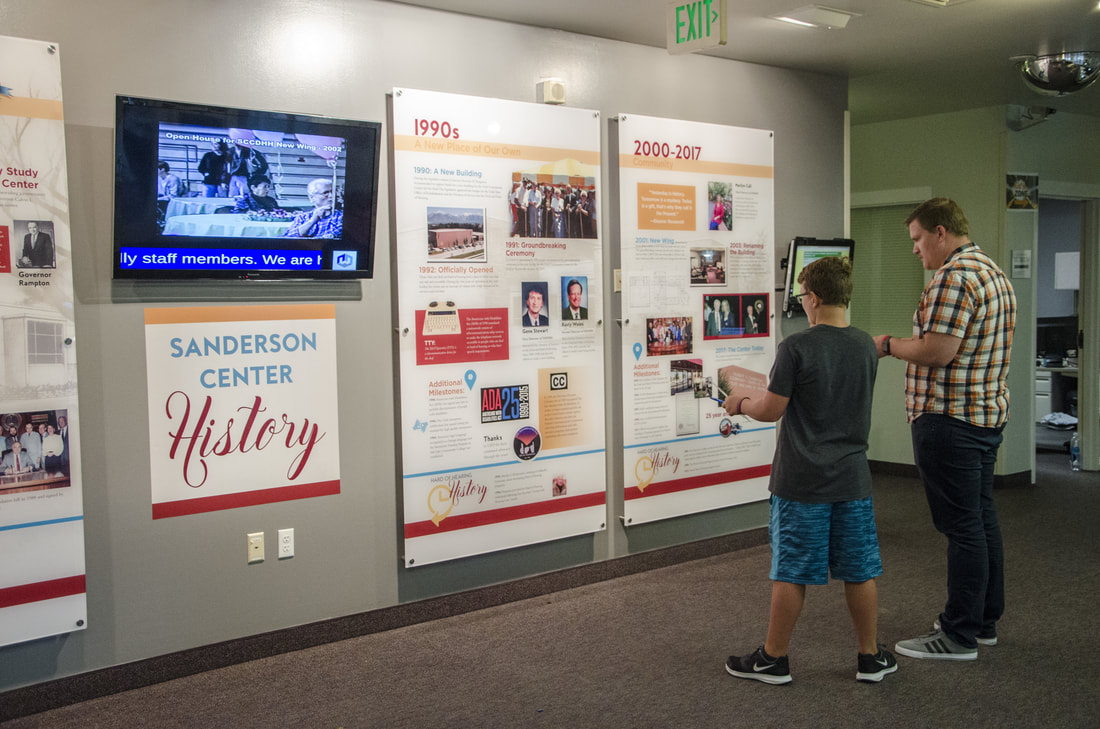 Robert Belshe and his son viewing the historical timeline panels of the Sanderson Community Center
At the celebration, special recognition was also offered to the following individuals, particularly Marilyn T. Call 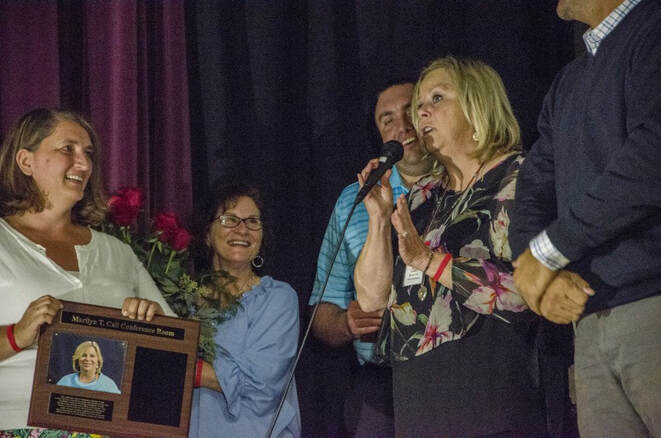 Marilyn Call receives recognition for her years of service
In honor of Marilyn T. Call's length of service as director, the conference room at the Sanderson Community Center has been named the Marilyn T. Call Conference Room. She has extensive Capitol Hill expertise and strong ties to a number of politicians. When she first got the job, she found there was a lot of work to be done to expand needed social services so the division could meet high standards of service. (Sanderson, 2004).

As the director of the Sanderson Community Center, Marilyn went on to grow or add divisions and programs. She assisted Deaf and hard of hearing people with employment applications. She supported the development of a number of projects, including outreach and technology, interpreter mentoring and training, and the provision of free hearing loss classes. 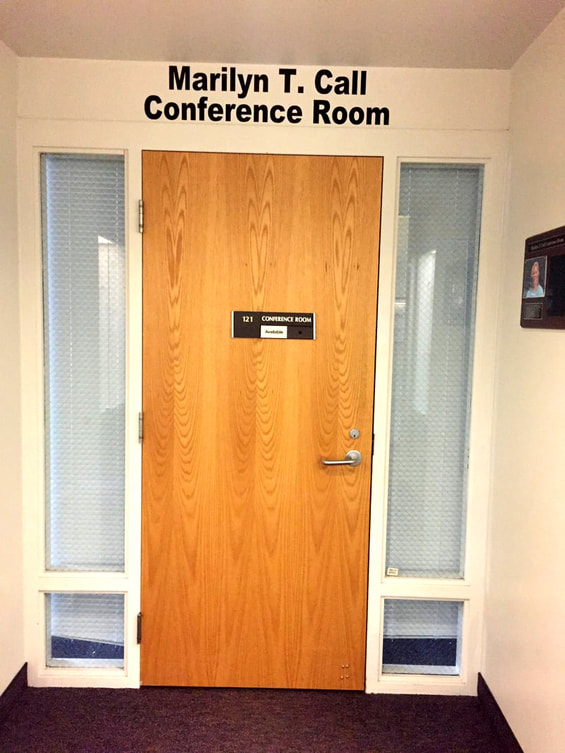 Marilyn backed the creation and expansion of a demonstration lab loaner bank, which allows Deaf and hard of hearing people to try out several assistive technologies before investing in the one that best fits their needs. She also lobbied for funding to hire American Sign Language-fluent mental health counselors and case managers (Hamilton Relay, June 3, 2011). Marilyn also collaborated in the establishment of the Southern Utah Deaf and Hard of Hearing Program satellite office in St. George, Utah, by obtaining funds for employment and office space. 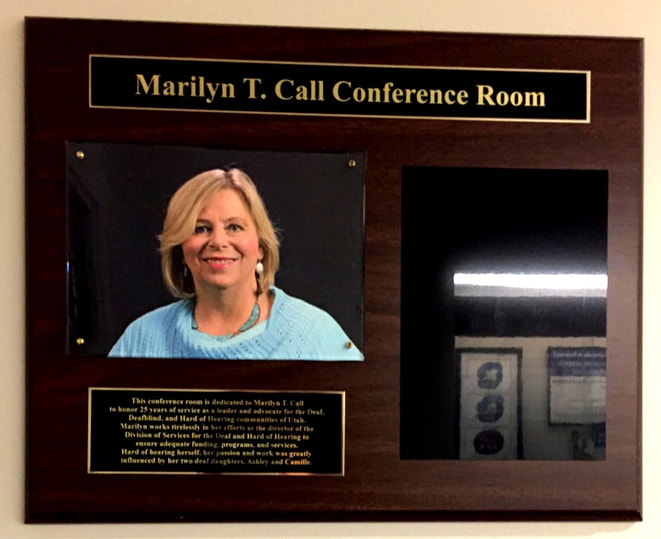 Marilyn retired in December 2017, one year after the Sanderson Community Center was moved to the Department of Workforce Service in 2016. Her years of dedication, leadership, and commitment to the Utah Deaf community are deeply appreciated.
BIOGRAPHY OF MARILYN CALL
In her biography, you may learn more about Marilyn T. Call
​and her accomplishments.
The Sanderson Community Center's 25th Anniversary
​Celebration" Program Book

Jodi Becker Kinner, the website's author would like to point out two inaccuracies on the historical timeline panels. W. David Mortensen is one of them. On the panel, his name is misspelled as 'W. Dave Mortensen,' when it should be 'W. David Mortensen.'

Another oversight on the panel is Beth Ann Campbell's job description of "Program Specialist," although she was, in reality, the Director of the Utah Community Center for the Deaf from 1985 to 1992. Campbell was appointed to replace Dr. Robert G. Sanderson, who retired in 1985. Campbell's job title was clarified in a letter to the former director. Also, have a look at the images of Campbell's title as evidence. Two months after the 25th Anniversary Celebration, these images were taken. On the panel, it was too late to change Campbell's title.

Although the cost of correcting the errors is a concern, Jodi is hopeful that those two errors will be addressed and Campbell's photo will be returned to its rightful place on the wall (It was taken down twice in the Marilyn T. Call Conference Room due to a misunderstanding of job title). The Deaf community would not appreciate the Sanderson Community Center's services today if it were not for Campbell's dedication and contribution to the community. 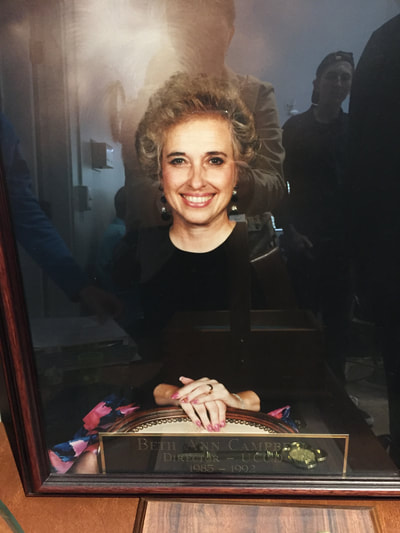 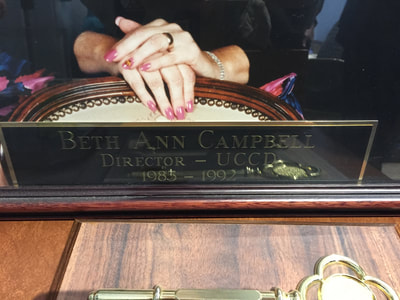 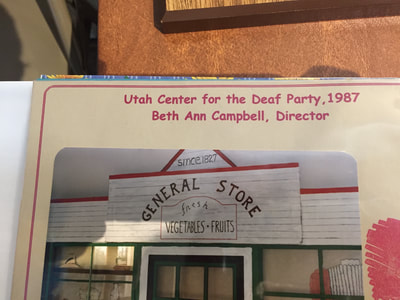 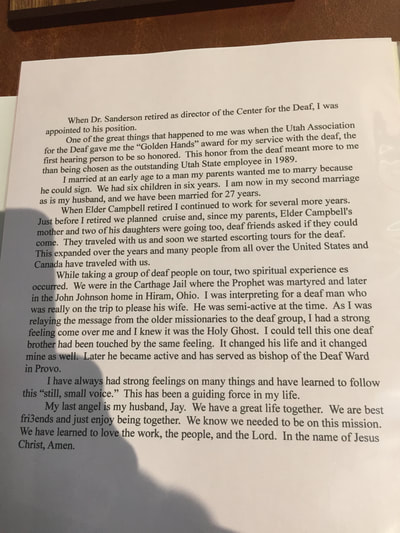 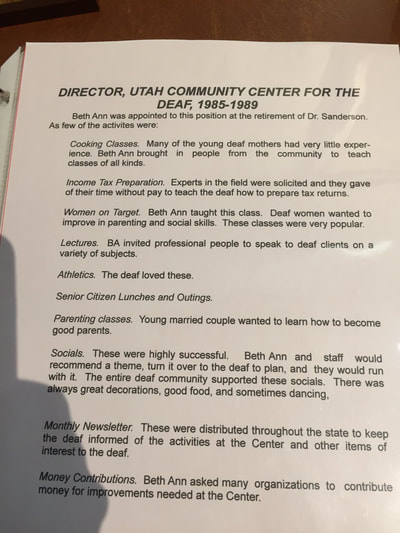 Sanderson, Robert G. A Brief History of the Origins of the Robert G. Sanderson Community Center of the Deaf and Hard of Hearing. March 9, 2004.