Utah Association of the Deaf Bulletins

Philippe Montalette and Stephen Persinger are to be commended for compiling and maintaining a file of UAD Bulletins.

​Jodi Becker Kinner
The Utah Association of the Deaf Awards
​I've compiled a list of persons who have earned the President's Award and the Golden Hand Award after browsing through the hard copy of UAD Bulletins. Please note, though, that some of the name may be missing. I should be able to find data accuracy once our UAD Bulletins are digitized and posted to internet archives. As of now, I've done the best I could with the names and years. So, enjoy!
President's Award
The President's Award recognizes individuals or organizations who have excelled in their work or achievements. The president of the Utah Association of the Deaf makes the final decision.

I have compiled a list of names who have earned the President's Award after browsing through the physical copy of UAD Bulletins. Please note that some of the name may be missing. I should be able to find data accuracy once our UAD Bulletins are digitized and submitted to the website archives. As far as I can tell, I've put the names and years together as best I could. So, have fun with it!
The Recipients of the President's Award
​Golden Hand Award ​
The "Golden Hand Award" is the highest honor bestowed by the Utah Association of the Deaf (UAD). This award recognizes individuals or groups who have excelled in their work or accomplishments. The Golden Hand Committee decides on this honor after receiving nominations from the Utah Deaf community. Furthermore, the Golden Hand Award is given every two years to an individual or group that has made a significant contribution to the betterment of Utah's Deaf community.

The Golden Hand Award is based on the following criteria:​

The Recipients of the Golden Hand Award
Logo of the Utah Association of the Deaf
​Since 1975, the Utah Association for the Deaf had used the same logo designed by W. David Mortensen's brother, Don Mortensen (hearing). On June 8, 1975, a new proposed logo design was presented to the UAD board of directors. The design received unanimous approval. The Board of Directors voted to accept it as the official seal and logo (UAD Bulletin, June 1975, p. 3).

​The logo's wrap-around arrows rotate, symbolizing the UAD's ongoing continuation. Blue seems to have been chosen because of the 1950s Utah School for the Deaf and Blind colors. In order to be visible, one arrow is tinted lighter blue A beehive symbolizes the organization's and its members' hard work (2005 UAD General Conference Minutes). 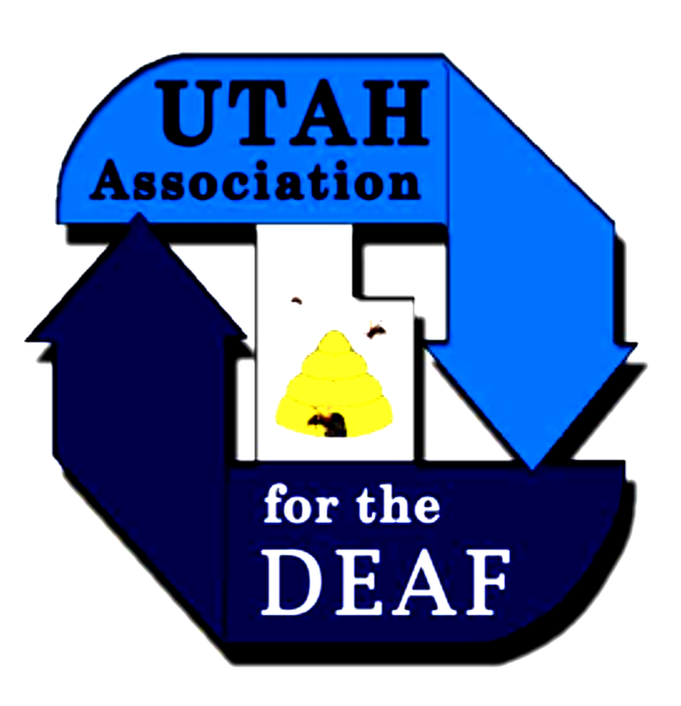 ​The beehive with the bees in the center of the logo is similar to the Utah state seal.

"Industry" officially became the state motto on March 4, 1959. Industry is associated with the symbol of the beehive. The early pioneers had few material resources at their disposal and therefore had to rely on their own industry to survive. The word "industry" appears on both the State Seal and the State Flag.

The beehive also became the official state emblem on March 4, 1959. Utahns relate the beehive symbol to industry and the pioneer virtues of thrift and perseverance.
The UAD emblem was slightly altered in 2009 to commemorate the association's 100th anniversary. The name "Utah Association for the Deaf" was changed from black to white, as shown in the accompanying photo (Valerie Kinney, personal communication, February 19, 2012). 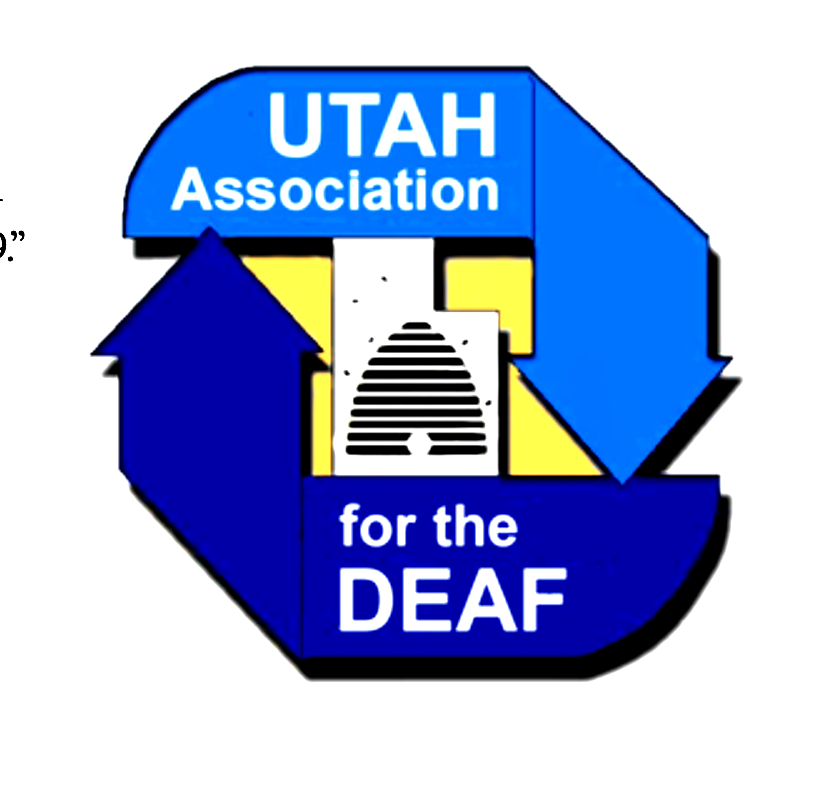 After watching the California School for the Deaf, Fremont's vlog about their new symbol designed by a Deaf person with the local Deaf community's engagement ideas, UAD had chosen to give Utah's Deaf artists a chance to design the UAD's logo. In addition, several Deaf people approached UAD, expressing their desire for a Deaf person to design the logo.

At the 2013 UAD Conference, UAD unveiled the new logo designed by Deaf artist James Smith, who was chosen as a finalist by the UAD Board and its members after a logo election chaired by Ellen O'Hara. His objective in designing was to:

"With the sun rising over the Wasatch front, UAD welcomes the second century with ambition and passion in continuing the legacy of excellence as it has been since 1909." 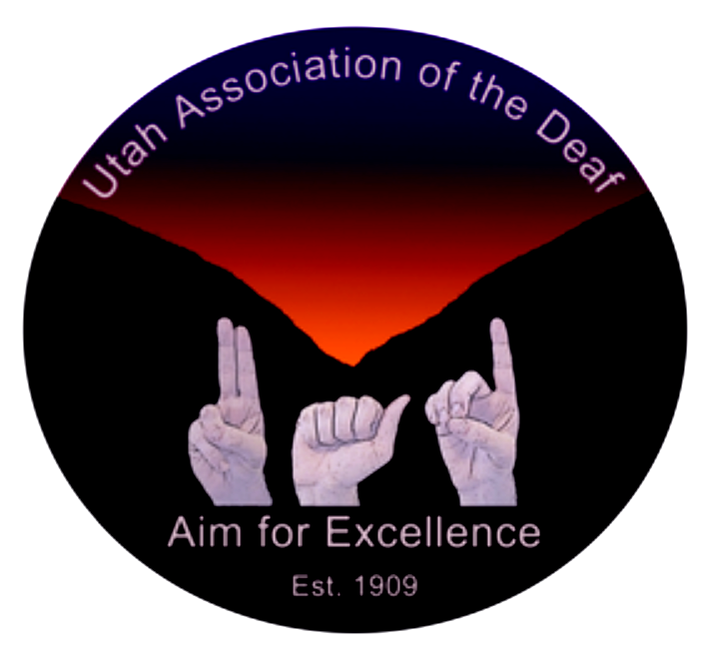 Brandon Bowden, a Deaf artist and member of the UAD Board, came up with the new logo. It was unveiled at the 2019 UAD Conference (Pamela Mower, personal communication, September 23, 2019). 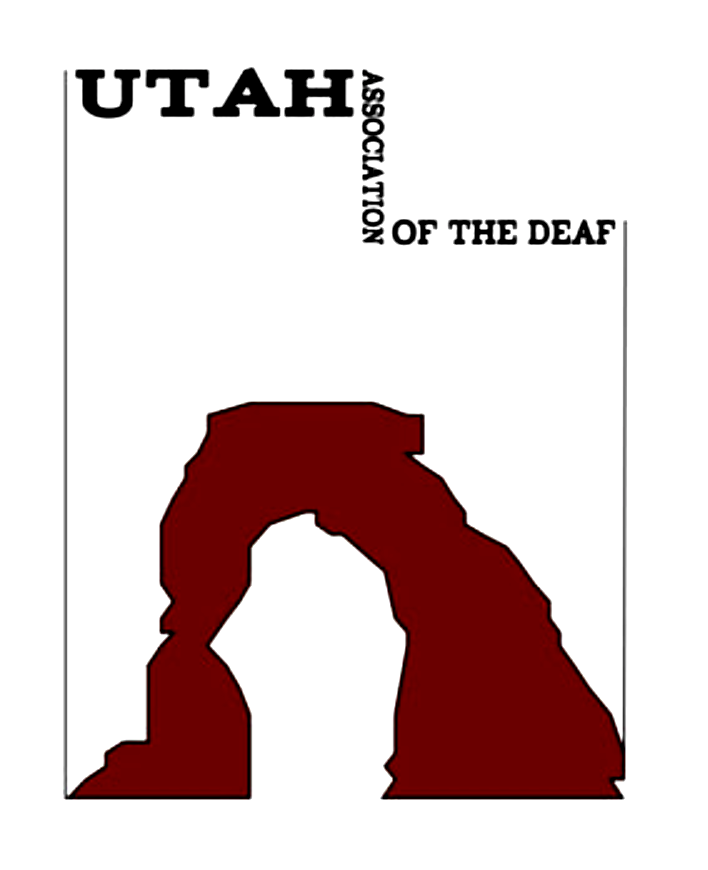 Under the leadership of UAD President Kim Lucas, a discussion about the Utah Association of the Deaf logo arose due to issues with the design and how it was not formatted correctly. One of the corners of the state line in the logo, for example, was not linked when examined closely. Another example is the readability of the name of the association. To read the vertical writing, you'd have to strain your neck.

The UAD Board agreed to hold off on unveiling the new logo until the 2021 UAD Conference, out of respect for the previous administration's efforts.

Throughout President Lucas' service at UAD, numerous different versions of the new logo were presented to the board, each with significant changes. It was also recognized that the Arch symbol did not represent all of Utah because it was located in the south-central part of the state. After hours of searching, it was decided that the image of mountains best suited the concept. It was unanimously voted as the replacement after several changes to the font and adding the line "Est. 1909" to the logo. It was subsequently introduced at the 2021 Conference, where many people were captivated by it and expressed a desire to purchase t-shirts bearing the new logo. The logo was designed as a team effort by the entire board, with Ben Smith putting it all together at the end (Martin Price, personal communication, February 16, 2022).