Logo of the
Utah Association of the Deaf

Compiled & Written By Jodi Becker Kinner
Edited by Valerie G. Kinney
2014
Utah Association for the Deaf has used the same logo designed by the brother of W. David Mortensen, Don Mortensen (hearing), since 1975. At the UAD board meeting on June 8, 1975, a new proposed logo design was presented. The design won unanimous favor. The Board voted to accept it as the official logo and seal (UAD Bulletin, June 1975, p. 3). 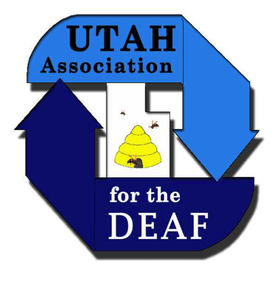 The wrap-around arrows are in a rotating position, signifying ongoing continuity of the UAD. Blue seems to have been picked because of the USDB school colors in the 1950's. One arrow is shaded a lighter blue for some visibility. In the center, inside the shape of Utah State, is a beehive, signifying the industrious nature of the UAD and its members (2005 UAD General Conference Minutes).


​The beehive with the bees in the center of the logo is similar to the Utah state seal.

"Industry" officially became the state motto on March 4, 1959. Industry is associated with the symbol of the beehive. The early pioneers had few material resources at their disposal and therefore had to rely on their own industry to survive. The word "industry" appears on both the State Seal and the State Flag.

The beehive also became the official state emblem on March 4, 1959. Utahns relate the beehive symbol to industry and the pioneer virtues of thrift and perseverance. 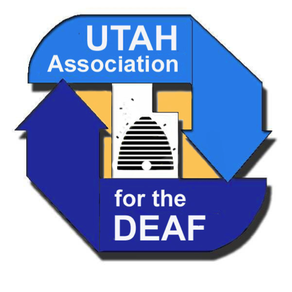 The UAD logo underwent a slight change for the 100th anniversary. It can be found other 2008 – 2009 Utah Telecom Book edition and shows a scroll with the words, “Celebrating 100 Years, 1909 – 2009.” The name “Utah Association for the Deaf” was changed from black to white (Valerie Kinney, personal communication, February 19, 2012). 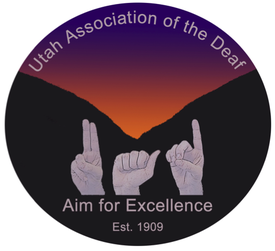 On behalf of the Deaf community, UAD has decided to give the Utah’s Deaf artists a chance to design the UAD’s logo after viewing the California School for the Deaf, Fremont’s vlog regarding their new emblem created by a Deaf person with the local Deaf community’s involvement ideas. In addition, UAD was approached by several Deaf individuals expressing their desire to have a Deaf person designs the logo.

After the logo election chaired by Ellen O'Hara, UAD unveiled the new logo designed by Deaf artist, James Smith who was chosen the finalist by UAD Board and its members at the 2013 UAD Conference. His purpose to design was:

"With the sun rising over the Wasatch front, UAD welcomes the second century with ambition and passion in continuing the legacy of excellence as it has been since 1909."

​At the 2019 UAD Conference, UAD unveiled the new logo designed by Brandon Bowden, a Deaf artist and member of the UAD Board (Pamela Mower, personal communication, September 23, 2019).
Note