Utah Association of the Deaf 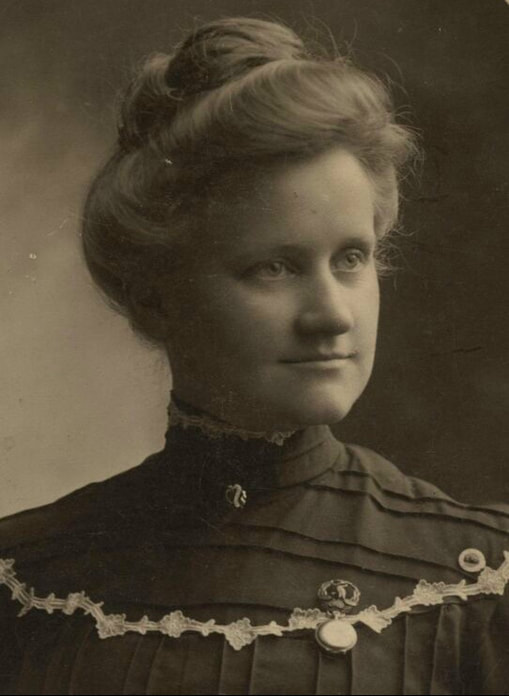 Elizabeth DeLong. Courtesy of FamilySearch
From the time when the National Association of the Deaf (NAD) was founded in 1880, the affiliated state chapter associations were establishing across the country.

In 1909, Elizabeth Delong, known as "Libbie," an alumna and Deaf faculty member of the Utah School for the Deaf, proposed the formation of the Utah Association of the Deaf for social purposes and welfare needs among USD alumni. It was approved by USDB Superintendent Frank M. Driggs. In the summer of 1909, the UAD emerged from this first alumni reunion (Evans, 1999).

UAD is still functioning today and is one of the oldest state associations in the United States. Since the founding of the UAD in 1909, this association has advocated for the civil rights movement in the areas of auto insurance, traffic safety, anti-peddlers, education, early intervention, employment, rehabilitation, interpreting service, health care, technology, telecommunications, youth leadership, and much more. 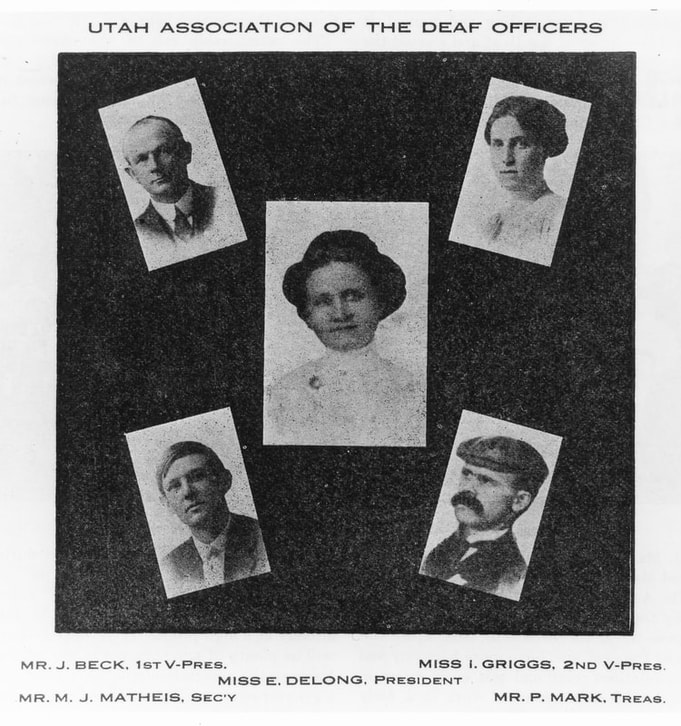 The 1909 Utah Association of the Deaf Officers. In courtesy of J. Willard Marriott Library 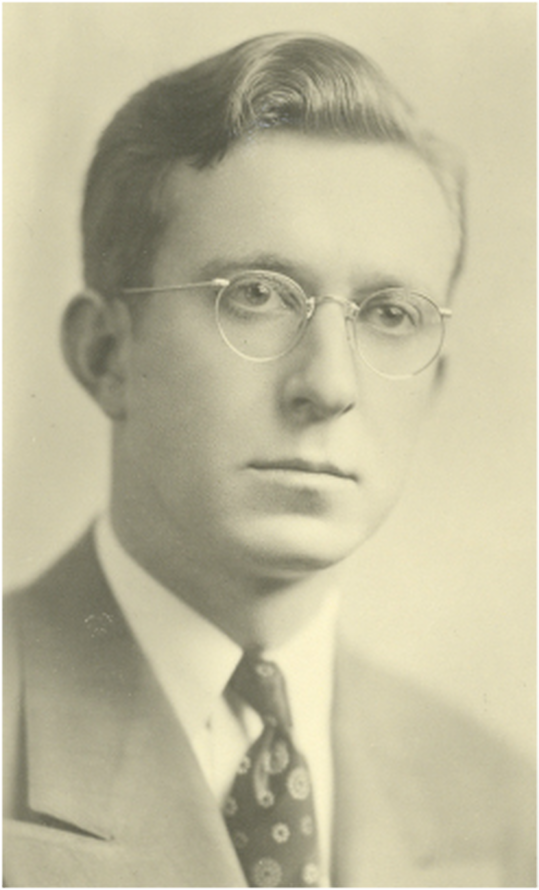 Dr. Robert G. Sanderson
Dr. Robert G. Sanderson was as well known nationally as he was locally. He served as president of the Utah Association of the Deaf from 1960 to 1963. One year later in 1964, he became the 17th president of the National Association of the Deaf (NAD) and served this association from 1964 to 1968. Under Dr. Sanderson’s leadership, in 1965, he moved the NAD headquarters from Berkeley, California to Washington, D.C. He continued to live and work in Utah where he devoted himself to serving his term as NAD president and advancing the cause of the deaf on both state and national levels (UAD Bulletin, Summer 1964, p. 1.). Bobbie Beth Scoggins, then president of the NAD reported that Dr. Sanderson as NAD president was recognized as one of the most powerful, inspiring advocates (NADmag, Spring 2012, p. 1). 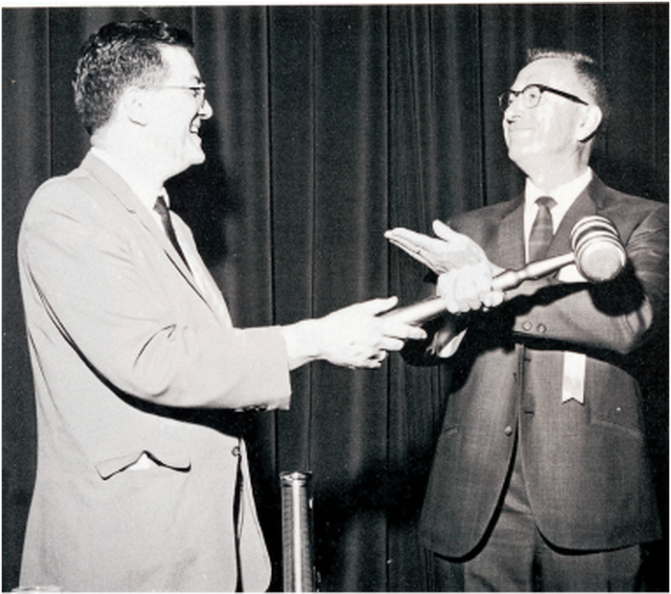 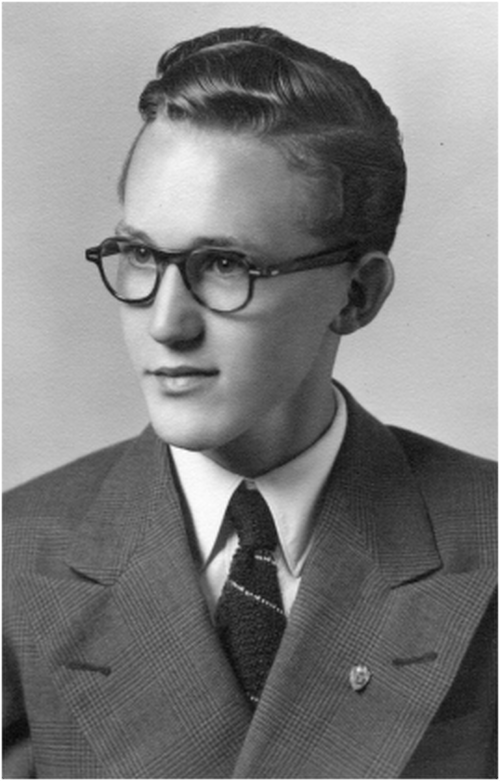 W. David Mortensen
While Dr. Sanderson was directing the Utah Community Center for the Deaf and participating at the local as well as national level functions, W. David Mortensen (known as Dave) dedicated a great deal of his time and energy to the UAD in promoting civil and accessibly rights among the Utah Deaf community. He had long been actively making contributions through the UAD. He served as president of the UAD in 1971 – 1985, 1987 – 1991, 1993 – 1997, serving a total of 22 years.  He is the longest serving president in the association and no one has beaten his record. He saw the organization go from a simple format to a more complex format, where he was called upon to administer several programs. UAD went from a small home-run organization to a well-functioning business office during his presidencies. 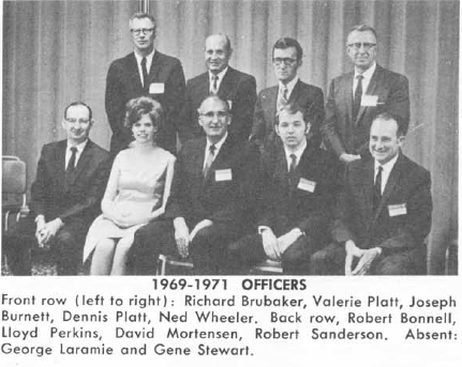 In fact, Robert G. Sanderson Community Center, Jean Massieu School of the Deaf, the expansion of interpreting services, and the establishment of Deaf Education with an emphasis in ASL/English Bilingual (then Total Communication) at Utah State University are the result of UAD leading the way.

For years, UAD has worked hard toward achieving/maintaining/ safeguarding equality in all aspects of Utah Deaf citizens’s lives and enabling them to function as well as to have an equal chance to live in this world as easily as a hearing person has.

Valerie G. Kinney, the longest serving board member of UAD 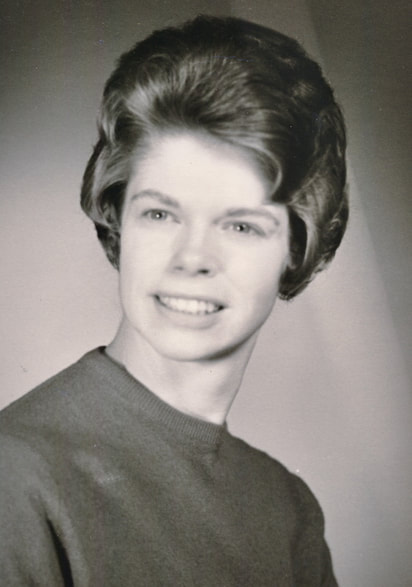 Valerie G. Kinney
As of 2014, Valerie G. Kinney has been serving the UAD for more than 40 years, starting in 1967. She has long made contributions to the Utah Deaf community through her work with the UAD (UAD Bulletin, July 2011). She has served as vice president, secretary, assistant treasurer, treasurer, UAD Bulletin editor, UAD Announce moderator, and on countless committees of the Utah Association for the Deaf. Valerie, as a Utah Deaf woman is the longest serving board member of the association. 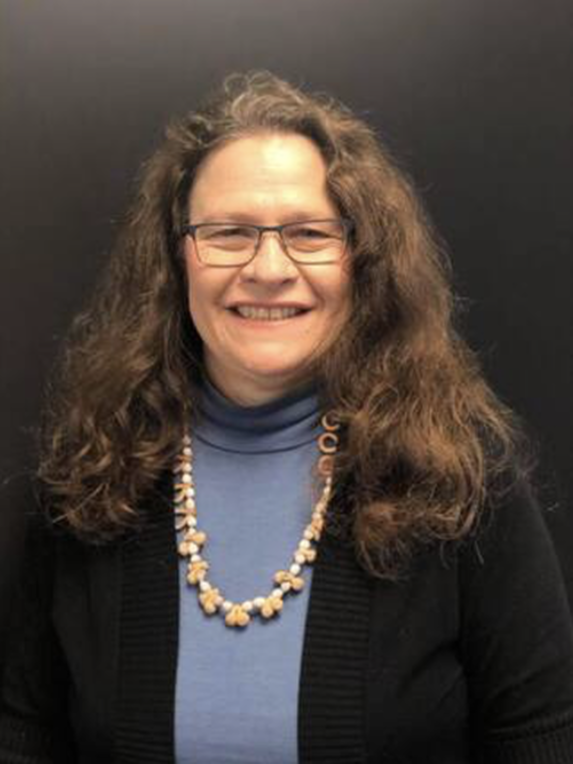 Kim Lucas, 2nd Female President of the Utah Association of the Deaf

​Finally, on September 7, 2019, at the UAD Conference, Kim Lucas became the second woman to be president of the Utah Association of the Deaf after over 100 years of men serving as the president.

The Oral and Mainstream Education Flourish in Utah

Dr. Grant B. Bitter. The Utah Eagle, 1961
The UAD had a long-standing battle with Dr. Grant B. Bitter, a staunch advocate for oral and mainstream education for the Deaf and hard of hearing children in Utah. Over the years, Dr. Bitter was a teacher and curriculum coordinator of the Extension Division School for the Deaf in Salt Lake City, Utah, a director and professor of the Oral Teacher Training Program under the Department of Special Education at the University of Utah, and coordinator of the Seminary Program of the deaf under the Church of Jesus Christ of Latter-day in the State of Utah. He was also the father of a deaf daughter, Colleen and became a strong proponent for the oral teaching method.

Under the leadership of Dr. Bitter, Utah's trend toward mainstreaming grew steadily in the 1960s. With his effort in 1962, a new policy at the Utah School for the Deaf (USD) embraced the Dual Division, known as the “Y” system. This meant that all children had to start in the Oral Division and were not allowed to enter the Simultaneous Communication Division until age 11 or 6th grade. Even though the Utah State Board of Education approved the Dual Track Program that was instituted at USD on June 14, 1962, the students were unaware of the reform until the first day of school (The Ogden Standard-Examiner, June 14, 1962; Diane Williams, personal communication, 2007).

Summarily, the USD in Ogden, Utah was divided into an Oral and Simultaneous Communication Division, each having its own separate classrooms, dormitory facilities, recess, and extracurricular activities, except athletic programs (The Utah Eagle, February 1968; The Ogden Standard-Examiner, October, 19, 1970). High School students were unhappy with the Dual Division and held a strike in 1962 and again in 1969 on the USD-Ogden campus. No one listened.

In the wake of the 1962 protest, the oral advocates suspected that the UAD was behind the plan for the 1962 student strike. The Utah State Board of Education investigated but failed to see the connection between the students and the UAD (Sanderson, UAD Bulletin, Summer 1963). Dr. Robert G. Sanderson, UAD president (1960-63), denied having anything to do with it. He stated that the strike was spontaneous – a reaction of the students against conditions, restrictions, and personalities which they felt had become intolerable (7). UAD noted, in the Fall-Winter 1962 UAD Bulletin issue, that they supported a fair test of the two-track or dual program at the Utah School for the Deaf as a classroom matter. However, they had a strong disapproval of the attempt at complete social segregation, interference with religious activities, crippling of the sports program, and the severe pressure on the children in the oral department to enforce the “no signing” rule (The UAD Bulletin, Fall-Winter 1962, p. 2-3). The implementation of dual tracking constituted the darkest chapter in the education of the deaf in Utah.

The Utah Association for the Deaf Officers, 1971
After finalizing the history of the Utah Association of the Deaf in 2014, the "Passing the Torch" logo is very much how I envisioned it: Combining equal participation of men and women in political affairs advocating, protecting, and securing the Utah Deaf community's civil rights.

Since the founding of UAD in 1909, the outstanding former leaders together at one time passed the torch to the new leader. Up to today, the association continues to give light to the leader to ensure that the local community's accessibility and equality needs are met, respected,  and accommodated.

Few in the Utah Deaf community, particularly the younger generation realize everything UAD has done for them that they now take for granted. Now that we have available resources to access, it is my hope that the “Passing the Torch” symbol will help us remember, appreciate and reflect on UAD’s long history of civil rights protections.

​Although UAD has its own logo, the "Passing the Torch" is just my personal logo sharing my vision of UAD's efforts on behalf of the Utah Deaf community.

Salutations to the UAD leaders! 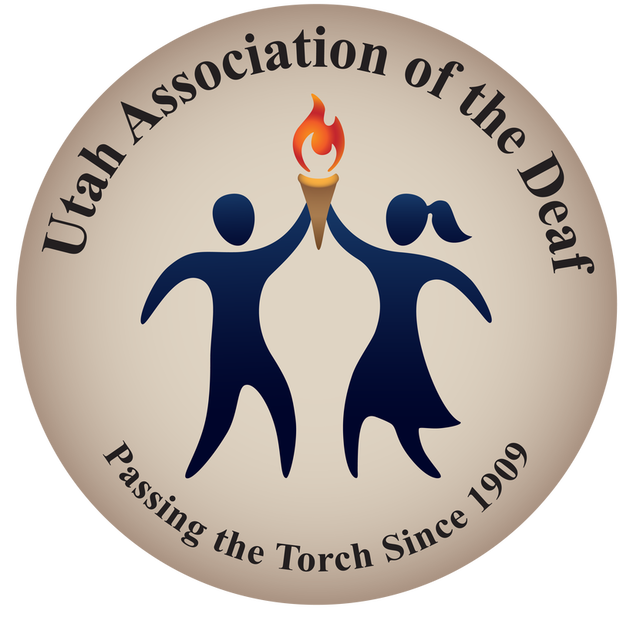 A Slideshow of the Utah
Association of the Deaf Conventions

​
A Scrapbook of the Utah Association​ of the Deaf Conventions: 1931-1973 ﻿
Collected & Created by Gerogia Henricks
​Photographed by Duane L. Kinner
Bibliography
​
Evans, David S. “A Silent World in the Intermountain West: Records from the Utah School for the Deaf and Blind: 1884-1941.” A thesis presented to the Department of History: Utah State University. 1999.