Compiled & Written By Jodi Becker Kinner
Edited by Valerie G. Kinney
2013-2021
﻿The Evolution of Hearing Aids ﻿
Hearing aids have gone a long way over the years. The first hearing aid was invented in the 17th century. From ear trumpets to today's hearing aids, hearing devices have evolved over time.
The Growth of Cochlear Implants ​ 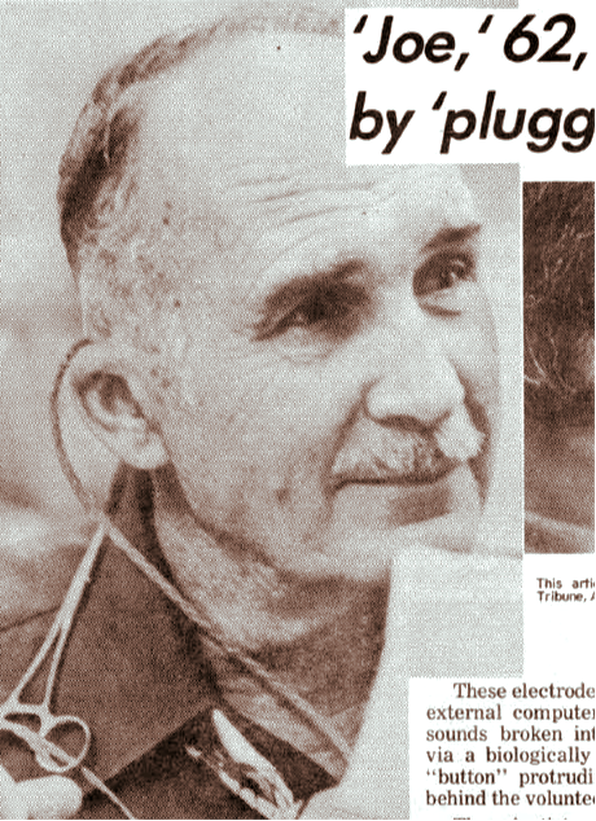 Joseph Burnett. UAD Bulletin, June 1975
1950s-1960s - The first cochlear implant was initially invented in the 1950s. The Utah Association of the Deaf was evidently interested in cochlear implants when they became popular in the 1960s.

1963 - Dr. David A. Dolowitz, an otologist at the University of Utah School of Medicine, spoke about the Deafness Research Foundation Temporal Bone Bank at the Utah Association of the Deaf Convention in 1963. UAD promoted the Temporal Bone Bank Program during its convention and stood ready to assist those who wanted to donate their temporal bones to help doctors with research that could help others hear (UAD Bulletin, Spring 1963).

1975 - Joseph B. Burnett, a 1933 graduate of the Utah School for the Deaf and a 1937 graduate of Gallaudet College, received his new cochlear implant in Los Angeles in 1975. (UAD Bulletin, June 1975). Joseph is thought to be the first deaf person in Utah to receive a cochlear implant. Cochlear implants are now being used by increasingly deaf children and adults. 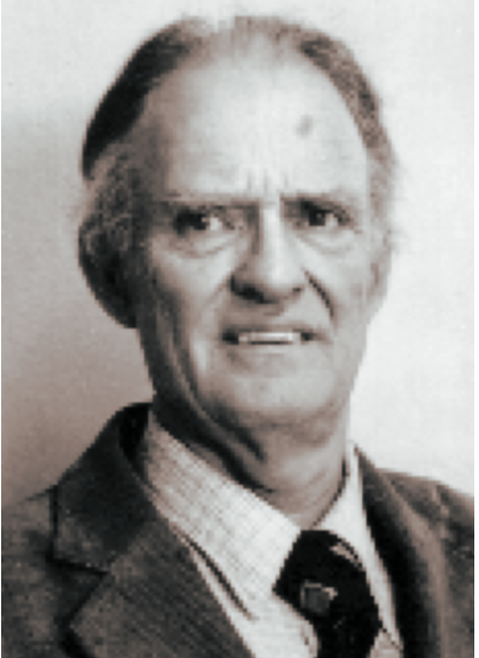 Dr. Robert H. Weitbrecht @ Ultratec, Inc.
1960s - Before the 1960s, Deaf people had to travel to a hearing or Deaf friend's residence to see them for business or pleasure. They also enlisted the help of neighbors to make phone calls for them. Those with a phone at home would expect their children to make calls for them, and these repetitive requests could strain the parent-child relationship (Walker, 2006).​

1964 - Until TTY was launched in 1964, Deaf people had to deal with these difficulties and inconvenients for many years. Robert H. Weitbrecht, a Deaf physicist, and Dr. James C. Marsters, a Deaf orthodontist, discovered a way to transmit phone lines using teletype machines, which are comparable to those used to send telegrams. Teleprinter Phonetype Units were used for telephone communication (TTY). The TTY was first demonstrated at the 1964 Alexander Graham Bell Association for the Deaf Conference in Salt Lake City, Utah (Mortensen, UAD Bulletin, September 2012).

1965 – Mr. Weitbrecht and Dr. Marsters went on to start the first TTY company. The Deaf community was greatly influenced by TTY. "TTY is growing on in many areas in the United States like wildfire," Dennis R. Platt, president of the Utah Association for the Deaf (UAD), said (Platt, UAD Bulletin, Fall 1969). Finally, having TTY prevented Deaf individuals from having to rely on neighbors, friends, relatives, and their children, as well as the availability of a car to see other people and the frustration of not being able to find people at home.

1970s-1980s – The big mailbox TTY machines were eventually replaced by smaller portable typewriter-style machines that could be put on a desk or counter (Walker, 2006). 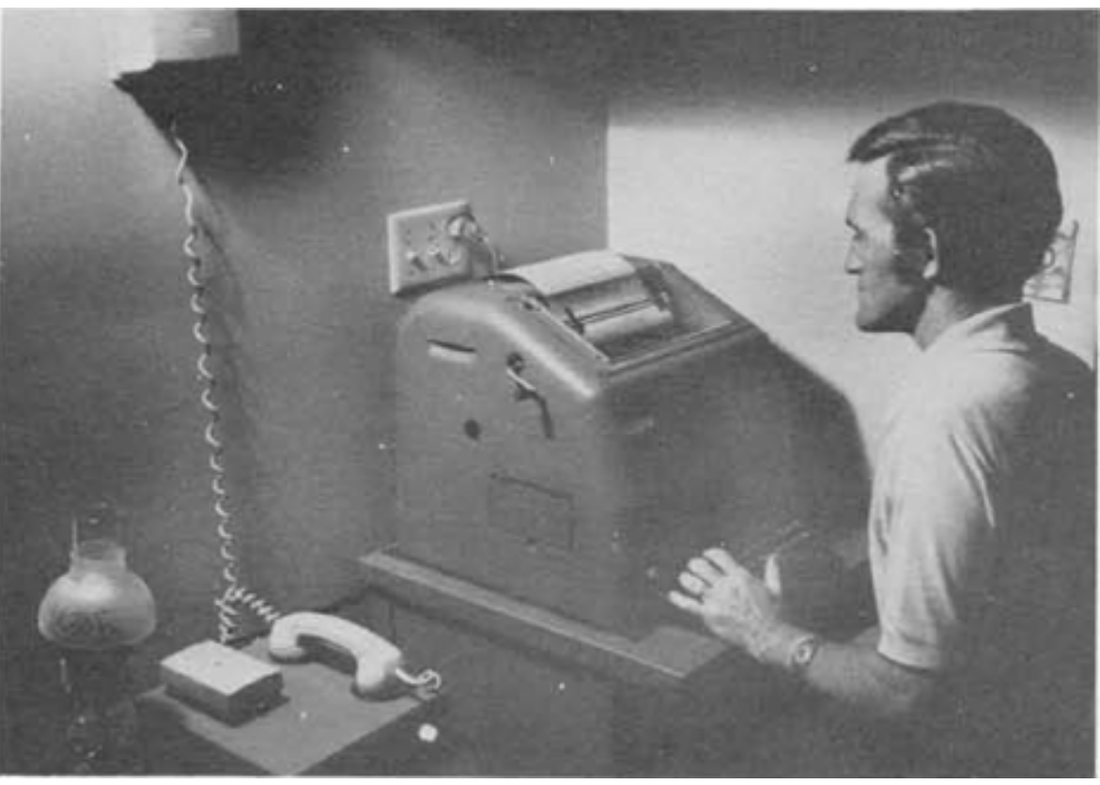 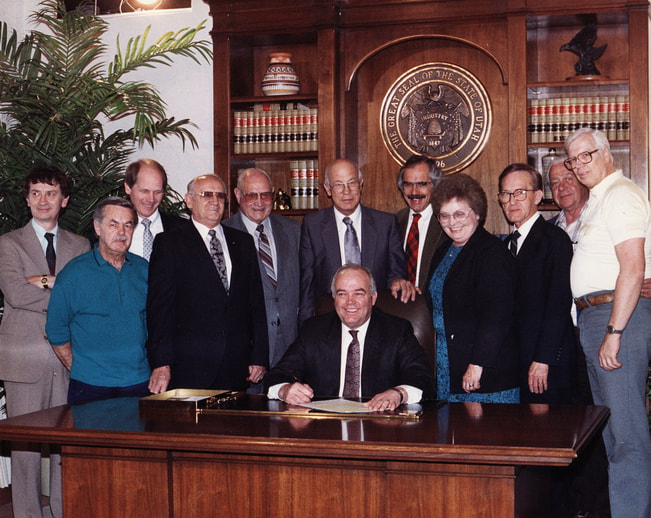 Deaf Supporters with Utah Governor Bangerter, 1987
1987 – During the 1987 legislative session, the "Hearing Impaired Telecommunication Access Act" was passed. The goal of this law was to make it easier for Deaf people to use ordinary phone services. W. David Mortensen, president of the UAD, signed a contract with the Public Service Commission on October 13, 1987, for the operation of the Utah Relay Service in Utah. The UAD appointed Madelaine Perkins, a CODA and certified interpreter, to take over as the program director of the Utah Relay System, which was based at the Utah Community Center for the Deaf (Mortensen, UAD Bulletin, November 1987).

​
The Establishment of Utah Relay Service 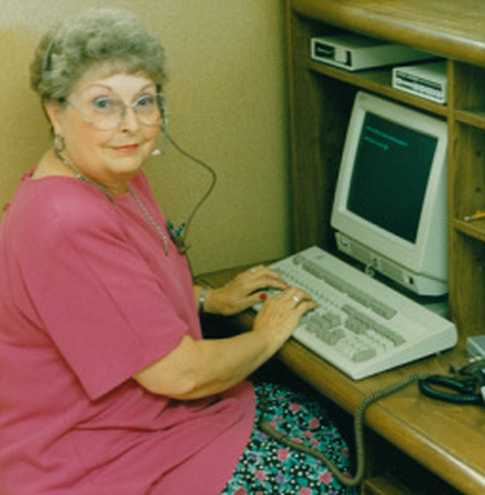 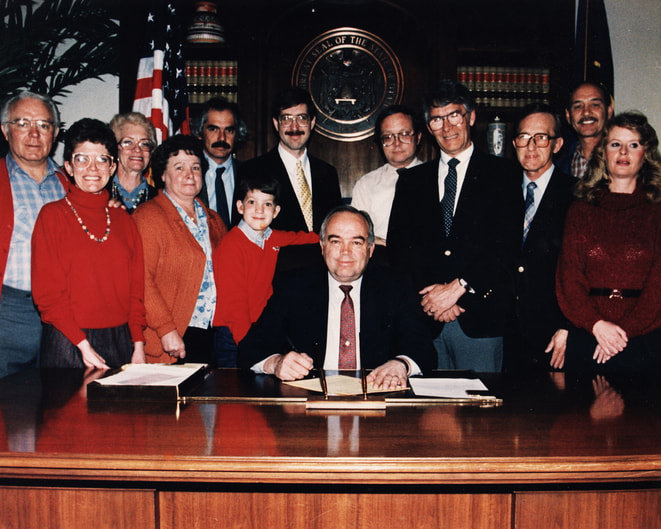 The Establishment of the Sorenson Communications, Inc. 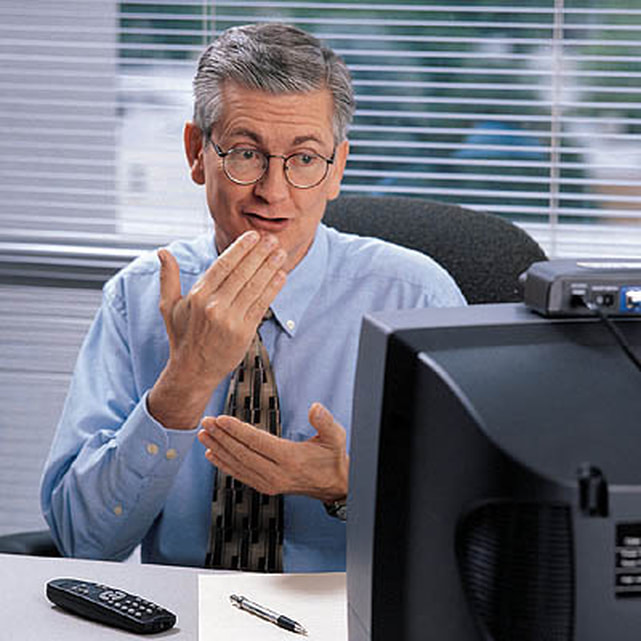 Jonathan Hodson
1999 - 2000 – In 1999, the UAD contract came to an end. Sprint was granted the Utah Relay Service after a bid by the Public Service Commission in 2000. When Sorenson Communication, Inc. entered the picture in 2003, the TTY became obsolete.

2003 – Jonathan Hodson, a Utah Deaf native and former Director of Business Development at Sorenson Communications, Inc. (1996-2006), tried unsuccessfully to sell Sorenson Vision and other companies on the concept of video relay service that he envisioned in the early 1990s. Jonathan was also crucial in raising awareness of low-cost video-compression technological equipment available to the Deaf community among Deaf groups and state relay administrators over the years. As a result, Deaf organizations and state relay administrators lobbied the Federal Communications Commission to incorporate video relay into the telecommunications relay service infrastructure (Jonathan Hodson, personal communication, October 27, 2013). In 2003, Jonathan's perseverance and hard work paid off when Sorenson Communications, Inc. introduced a free video relay service for the 28 million Deaf and hard of hearing users in the United States. This company was the first VRS provider to create a videophone for the Deaf community (The Endeavor, Winter 2017). The users now have access to the video relay system that is "functionally equivalent."

Jonathan had helped Sorenson Media become the No. 1 supplier of video-relay call services to the Deaf as the company's national Video Relay Service outreach director. He is pictured making a phone call to a hearing consumer using VRS (The Salt Lake Tribune, July 14, 2004).
The Development of Closed Captions 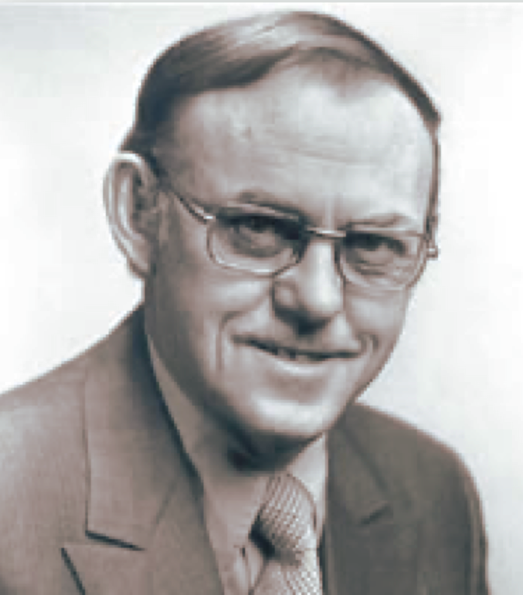 Dr. Malcolm J. Norwood @ Described & Captioned Medial Program
1930 - Prior to 1930, the Deaf community loved seeing silent films and some captioned films. Deaf individuals were at a disadvantage since the non-talking movies were replaced with talking films in the 1930s (Walker, 2006).

1960 - For the past 30 years, no captions were added to movies. Deaf people were  left out in the cold (Sanderson, 2004). Captioned Films for the Deaf was not available until June 30, 1960, under the direction of Dr. Malcolm J. Norwood, a Deaf man renowned as the "Father of Closed Captioning." Dr. Norwood, sometimes known as "Mac," worked as a director for the US Department of Health, Education, and Welfare, where he persuaded top-level managers of the necessity for Deaf people to be educated through captioned films (Sanderson, 2004).

Mac launched a statewide program of captioned films for Deaf people after receiving authorization. It sparked a lot of interest in the Deaf community. Thousands of Deaf people rented or bought 16mm projectors to watch films from the US Department of Health, Education, and Welfare's film library in Washington, D.C. (Sanderson, 2004).

1970-1980 - Dr. Norwood's perseverance paid off in the 1970s and 1980s when the captioning industry as we know it today was born (Feldman, 2008). Closed captioned television shows were popular at the time, and "this pulled Deaf persons away from captioned film showings at Frat gatherings" (Walker, 2006). The Frat continued to meet, but the captioned films were eventually phased out.

1990 - President George H.W. Bush signed the "Television Decoder Circuitry Act" into law on October 16, 1990. By July 1, 1993, all television sets with displays of 13 inches or greater were required to have built-in closed captions (UAD Bulletin, December 1990). For the Deaf and hard of hearing community, it was a dream come true. They were no longer required to purchase a captioning decoder. In a hotel room and at the homes of friends and family members, they were finally able to watch TV with closed captions.

﻿2000 - ﻿Captions are required by federal law to be presented on television programmes and wide-release films. Deaf people now have the option of watching captioned television programmes and movies. More captioned movies have been added to Utah theaters as a result of the Popcorn Coalition and Utah-efforts. CAN's With the advancement of technology, Deaf directors/producers are producing and directing an increasing number of ASL films. Lance Pickett (R.E.M. Films) and Julio Diaz, Bobby Giles, and Jim Harper are local Utah film producers (Eye-Sign Media). 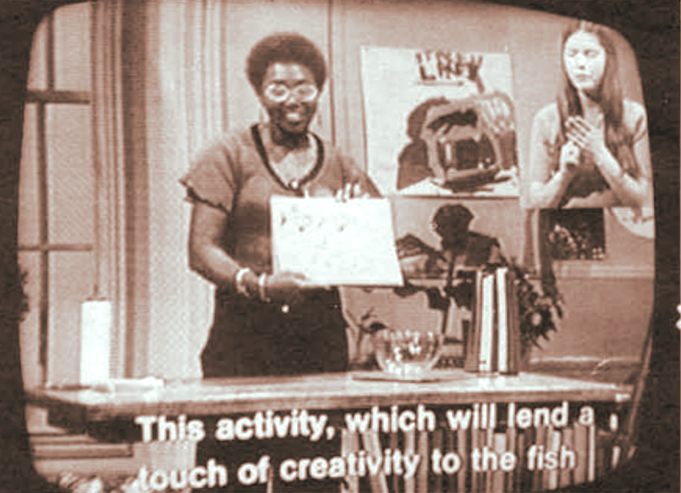 A Slideshow of the ​Utah Deaf Technology
References - Coming soon!