Vocational Training Programs
​at Utah School for the Deaf 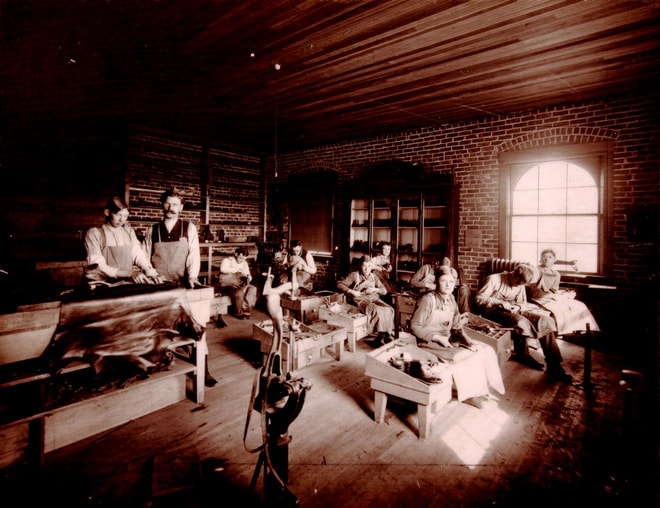 USD Carpentry Shop, early 1900s
Vocational training played a prominent role at the Utah School for the Deaf (USD) from its inception. Learning the vocational trades or skills allowed the Deaf or hard of hearing student to become a contributing member of society after leaving the school. 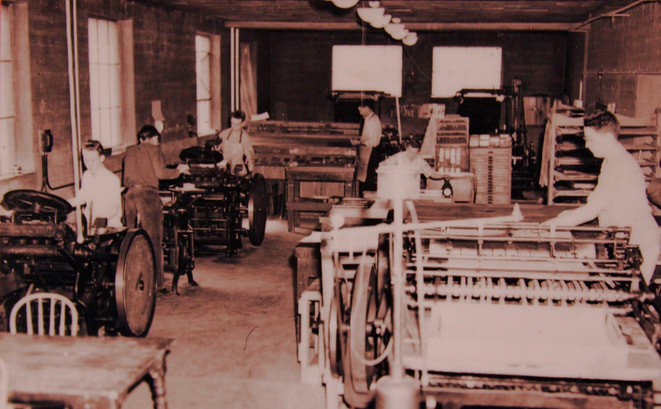 USD Printing Shop, 1940 to 1960
The effort of the USD was to train the young men and women to possess marketable occupational skills as well as prepare them for marketable vocation. Through the provision of communication access, the students were taught to do the industrial work in the industrial arts building with a fully equipped carpenter shop, boot and shoe shop, cabinet shop, and printing office. While they were learning to read and write, they had the privilege of choosing any of the vocational trainings without additional charge (Roberts, 1994).

By 1900s, the leather crafts, mechanical drawing, upholstering, and photography were added to the boys’ vocational department (Driggs, The Utah Eagle, November 1, 1901). The boys in the top six levels of the school participated in the vocational training programs. During the initial two years, the boys were exposed to each training area. During their last four years in secondary school, they were allowed to choose one area in which to major. Unemployment among the school’s alumni was rare (Utah School for the Deaf Program Book). 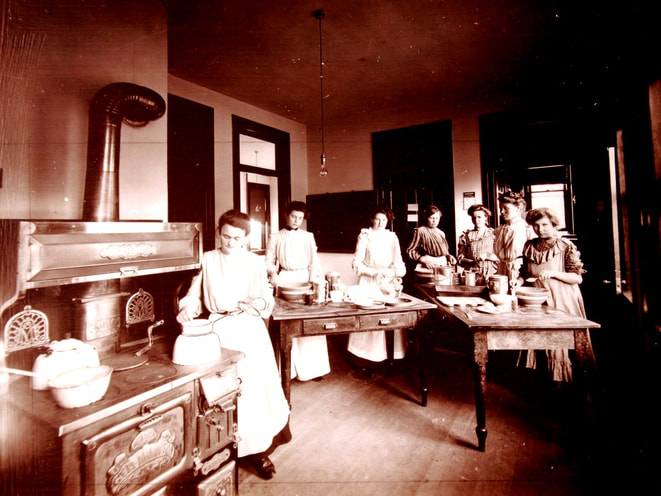 USD Cooking Class, 1903
Through the early training at USD beginning in 1897, the girls were taught to make tea cloths, table dollies, throws, sofa pillow, pillow shams, handkerchief cases, bed quilts, and photo-holders. The homemaking classes also included instructions on how to cook, clean and sew. The girls received instruction in homemaking skills, including how to do embroidery and needle work, drawn work, crocheting, knitting and paper flowers.  The commercial subjects such as typing, filing and the proper operation of office machines were also included (The Utah Eagle, September 15, 1897). At the time, the goal of the USD was to show that every Deaf child should be sent to this school campus where the opportunity was offered to make children happy and contended in this life (The Utah Eagle, September 15, 1897) 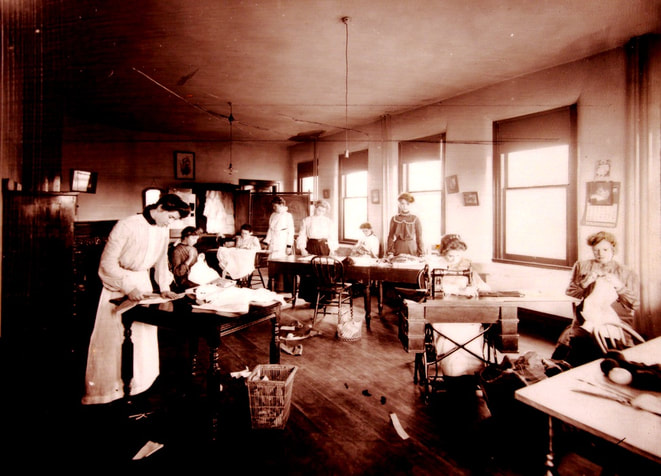 USD Dressmaking class, 1903
The girls’ vocational department paralleled that of the boys’ program during the top six levels at USD. The girls received instruction in art, cookery, sewing, dressmaking, fancy work, and housekeeping (Driggs, The Utah Eagle, November 1, 1901). The girls were required to study the regular courses in domestic science and assisted in the domestic work of the institution (Utah School for the Deaf Program Book). 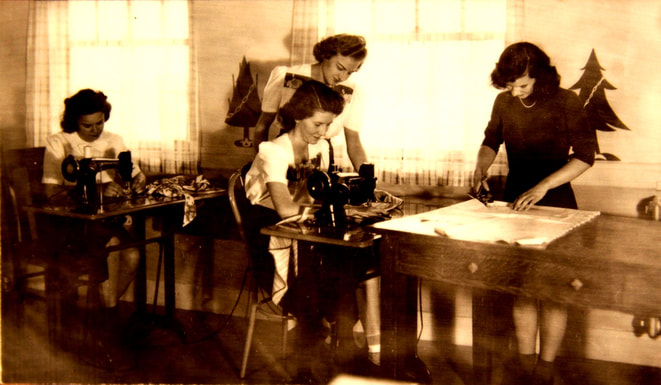 USD Sewing Class, 1940s
With students’ marketable skills, the USD aided them in providing an independent life for themselves and their families (Roberts, 1994). Through the vocational training programs, they became self-sufficient and relied less on their family members. In addition, the Deaf community began to form and the Deaf individuals began to relate to each other in ways that had been impossible before the establishment of the USD in 1884 (Roberts, 1994).  After leaving the USD, many young men and women chose to live and work in the metropolitan areas of Salt Lake City or Ogden rather than return to the isolation of the small towns in Utah where few other Deaf people lived (Roberts, 1994).

For years, the Utah Association of the Deaf (UAD) advocated vocational training, as mentioned in the History of Utah Association of the Deaf. While the vocational training programs were still running at USD in 1968, the UAD proudly recognized that history revealed that Deaf students usually took their places in the society as useful tax-contributing citizens in one of the vocations rather than in one of the professions (The Utah Eagle, February 1968). 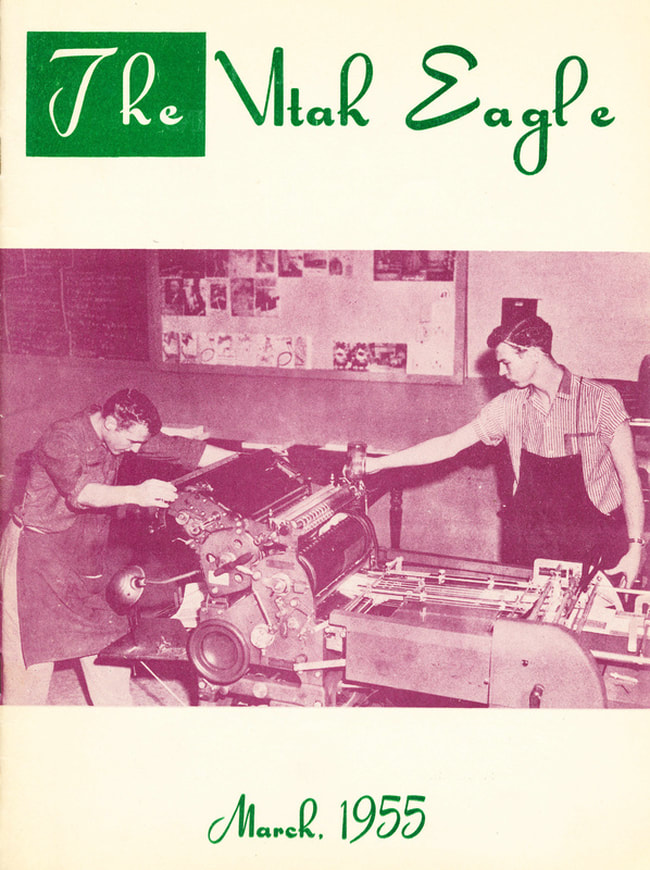 During the 1960s, the boys’ vocational program offered a few more trades and skills, such as welding, sheet metal, electrical and plumbing repair, as well as auto mechanics. The facilities at Weber State College were used by students who were able to meet the requirement set forth by the school (The Utah Eagle, February 1968). 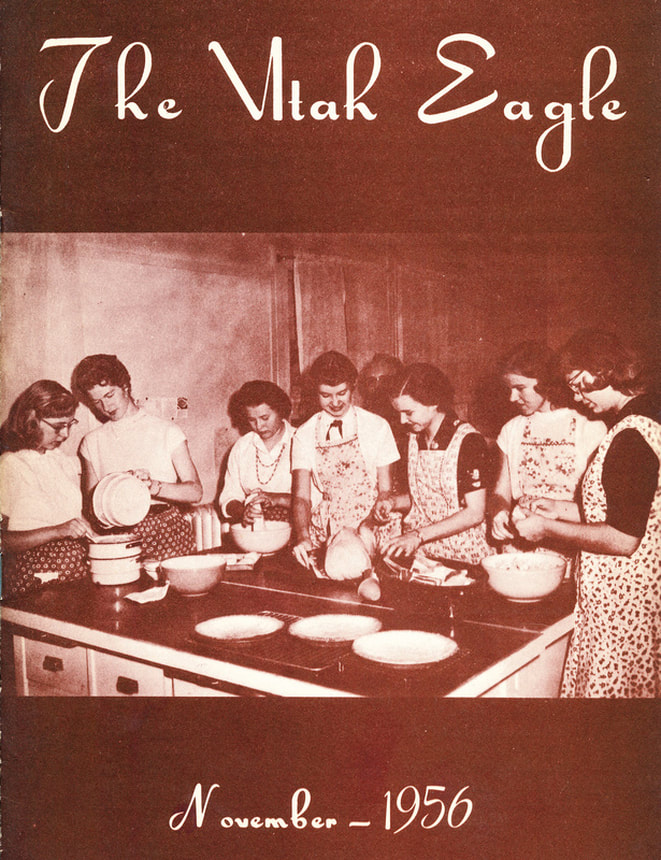 Starting in 1889, USD successfully provided vocational training programs for deaf and hard of hearing students despite years of budget cuts (UAD Bulletin, Winter 1961, p.1). However, due to promotion of general education rather than school-based vocational training and the growth of mainstreaming, vocational programs at USD gradually declined and eventually closed in the 1990s. Today, individuals who are Deaf or hard of hearing receive vocational guidance and assistance to obtain employment from the Office of Vocational Rehabilitation. In the advanced educational technology society, learning to read and write is critical and it is the foundation to an individual’s academic, potential, and professional success. Hence, it is imperative for Deaf and hard of hearing individuals to become functionally literate and tax paying citizens of society.