Published in 2014
On March 29, 2014, Utah Division of Services to the Deaf and Hard of Hearing and Utah Association of the Deaf were honoring W. David Mortensen, known as Dave, for his special lifetime advocacy award. He has made substantial contributions to the wellbeing of the Utah Deaf community. The plaque along with his portrait and brief biography are hung in the museum area at the Sanderson Community Center for all to see and remember.  It was Jodi Becker Kinner, an amateur historian who proposed honoring Dave for his exemplary service.

Mortensen was born in Provo, Utah on June 3, 1931. He became deaf at the age of 4 from scarlet fever. He attended Joaquin Elementary School, where he often felt lost and isolated. In 1942, at age 11, he was enrolled at the Utah School for the Deaf. The Deaf teachers became his role models as he learned sign language for the first time. Thus began a lifetime of advocating for Deaf people.

Mortensen attended Brigham Young University for two years after graduating from high school in 1949. He transferred to the University of Utah, where he became the first Deaf male to get a bachelor's degree in sociology in 1976, followed by a master's degree in social work in 1982. He was the first Deaf certified social worker in Utah, and he worked at Valley Mental Health as a deaf counselor. He worked nights at the Newspaper Agency Corporation. 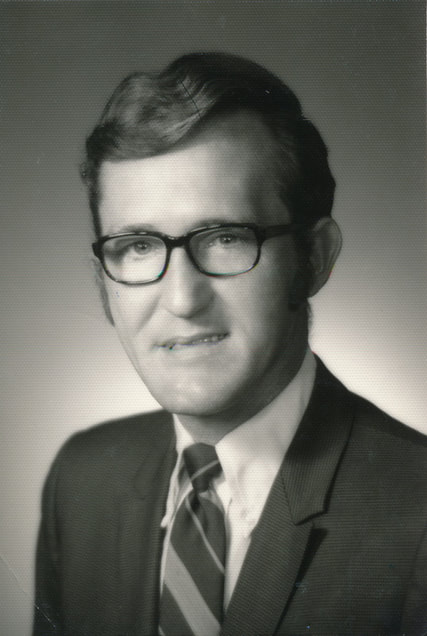 W. David Mortensen
Mortensen has served as a role model to Deaf adolescents and young adults. In the Utah Association of the Deaf, he has been an ambitious and persistent leader. Despite his demanding job and family schedules, he found time to serve as president for 22 years, from 1971 to 1985, 1987 to 1991, and 1993 to 1997. He is the association's longest-serving president.

Mortensen was best recognized for his work as a political activist, lobbying legislators to enact laws, organizing rallies for causes, writing news articles, and explaining deaf issues. He was instrumental in securing Deaf people seats on the Utah Schools for the Deaf and the Blind's Institutional Council. 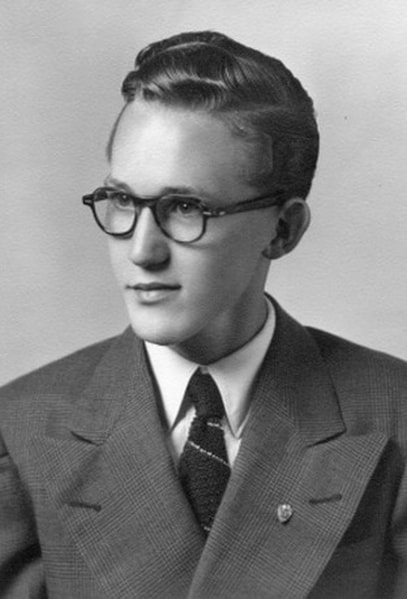 W. David Mortensen, 1949
A list of Mortensen's notable accomplishments and activism may be found here. 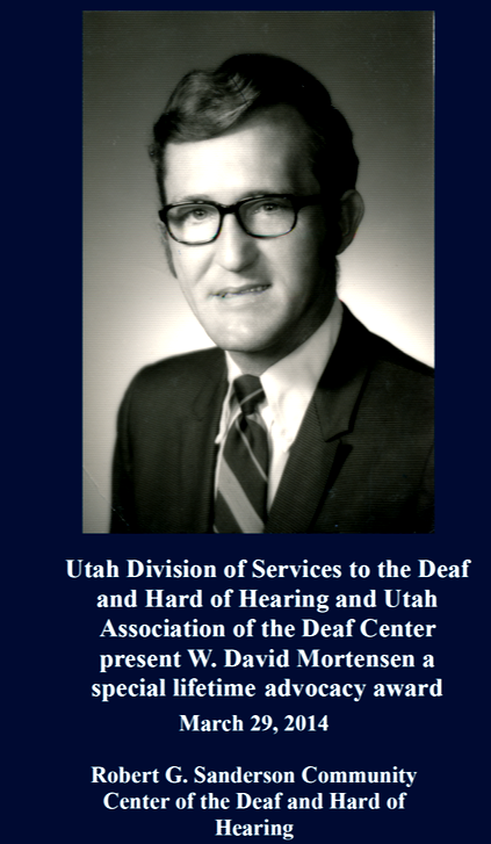 Mortensen was named president emeritus of the Utah Association of the Deaf in 2013. Dr. Robert G. Sanderson, who passed in February 2012, was his predecessor (Kinney & Kinner, UAD Bulletin, Vol 37.03). Mortensen dedicated his life to advocating civil and accessibility rights for the Deaf people in his community, leaving a lasting legacy for future generations. 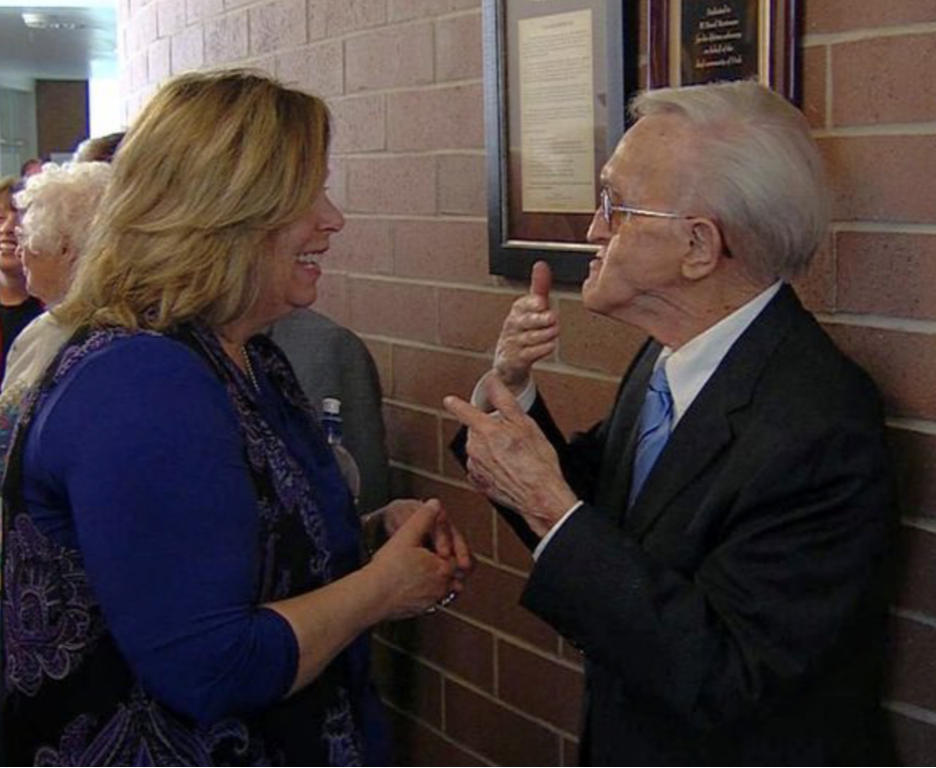 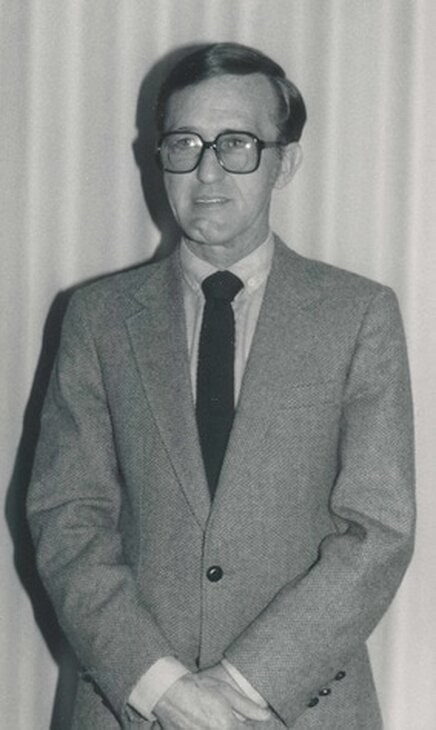 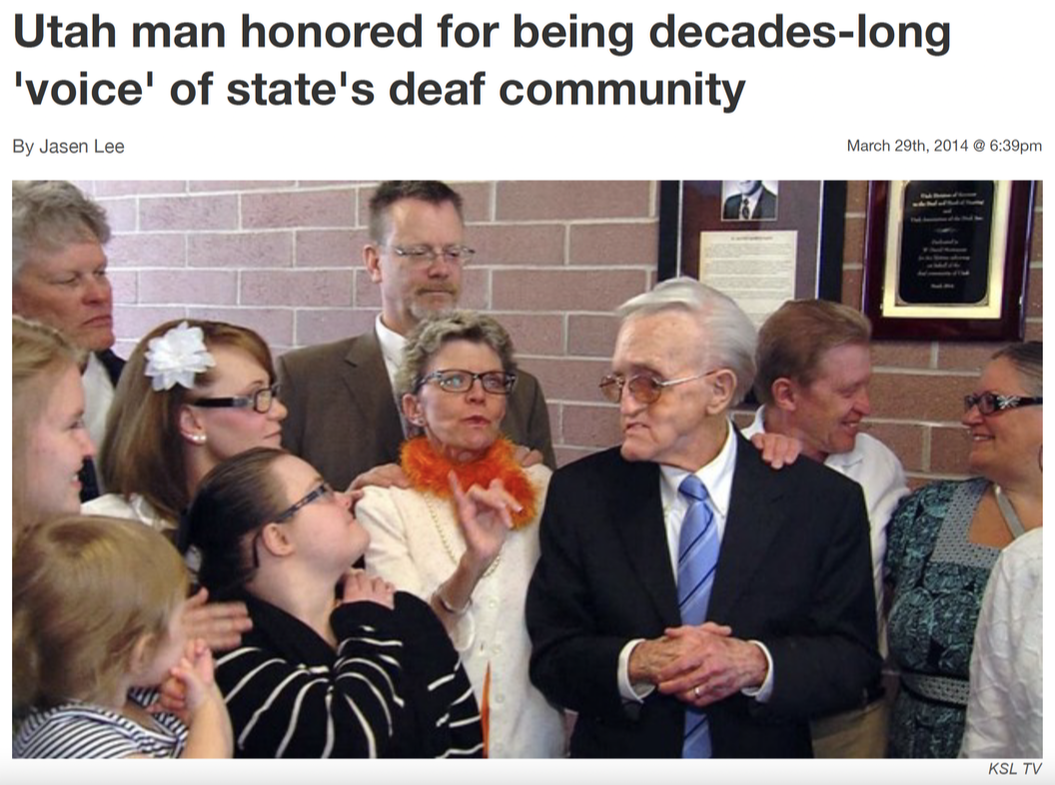 W. David Mortensen is surrounded by his family members, including his Deaf daughter, Kristi Mortensen (orange scarf) and her husband, Ron Nelson (behind her). KSL.com, March 29, 2014
BIOGRAPHY
More details can be found in the biography of W. David Mortensen
HISTORICAL DOCUMENTS
A Slideshow of W. David Mortensen's
​Honoring Ceremony, March 29, 2014
Photos taken by Duane Lee & Jodi Becker Kinner
"I just wanted to write a short note to you to thank you for the WONDERFUL job that you did in taking that photo-history of Dad's "honoring" (I'm David and Shanna's adopted son). I was not able to attend the ceremony due to being so far away (I live in Illinois) and have a rather unpredictable health challenge. Thank you so much for making it possible for me to "attend" even from so far away. You did an excellent and inspiring job!!" ~ Zak Mortensen, April 7, 2014.